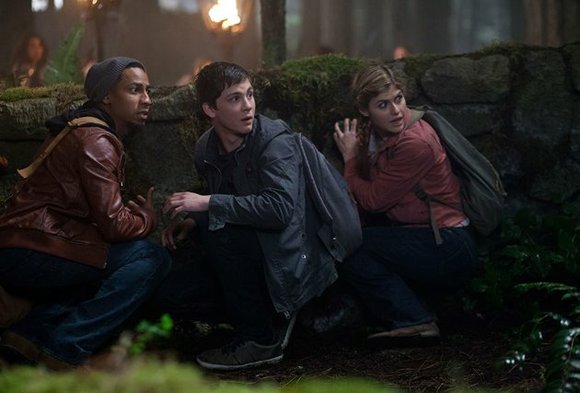 Elysium (R for pervasive profanity and graphic violence) Sci-fi thriller, set in 2154, in a world where the wealthy live on an exclusive space station while the rest of humanity is stuck on a polluted, overpopulated planet that’s looks like a Third World slum. Plot revolves around an ailing factory worker’s (Matt Damon) attempt to reach the heavily-fortified, orbiting retreat for some urgently-needed cancer treatment. With Jodie Foster, Alice Braga and Sharlto Copley.

Percy Jackson: Sea of Monsters (PG for scary images, mild epithets and fantasy violence) Logan Lerman reprises the title role in this sequel based on the Rick Riordan novel of the same name which finds the son of Poseidon and his pals presently embarking on an epic journey in search of the fabled Golden Fleece. Cast includes Alexandra Daddario, Brandon T. Jackson, Leven Rambin and Stanley Tucci.

We’re the Millers (R for pervasive profanity, crude sexuality, drug use and full-frontal male nudity) Raunchy road comedy revolving around a cash-strapped pot dealer (Jason Sudeikis) who enlists the assistance of a stripper (Jennifer Aniston), a latchkey kid (Will Poulter) and a teen runaway (Emma Roberts) to smuggle two tons of marijuana out of Mexico by posing as a family on vacation. Ensemble includes Ed Helms, Luis Guzman, Nick Offerman, Thomas Lennon and Kathryn Hahn.

I Give It a Year (R for profanity, sexuality and graphic nudity) Romantic comedy examining the toll exacted on a newlywed couple’s (Rose Byrne and Rafe Spall) marriage when the groom starts spending time with his ex-girlfriend (Anna Faris) while the bride finds herself attracted to a business client (Simon Baker). With Alex Macqueen, Minnie Driver and Stephen Merchant.

In a World… (R for profanity and sexual references) Lake Bell wrote, directed and stars in this dysfunctional family comedy as an aspiring voiceover artist attempting to follow in the footsteps of her movie trailer legend father (Fred Melamed), despite the fact that the field is dominated by stentorian-throated males. Cast includes Geena Davis, Rob Corddry, Jeff Garlin and Nick Offerman.

Jug Face (R for profanity, sexuality and gory violence) Hillbilly horror flick about a teenager (Lauren Ashley Carter), impregnated by her brother (Daniel Manche), who tries to escape from her backwoods community of redneck moonshiners when she becomes aware of their plan to sacrifice her to a wild animal in a deep pit.

The Machine Which Makes Everything Disappear (Unrated) Bait-and-switch documentary in which aspiring actors answering a casting call are instead merely interviewed about what life is like in the former Soviet bloc nation. (In Georgian with subtitles)

Off Label (Unrated) Prescription drug expose’ highlighting the explosion of the use of pharmaceuticals in America as seen through the eyes of eight unique patients.

Prince Avalanche (R for sexuality) English-language adaptation of Iceland’s Either Way, the odd couple comedy about a loner (Paul Rudd) who leaves the city for the country with his girlfriend’s (Gina Grande) halfwit brother (Emile Hirsch) to spend the summer painting traffic lines along a rural roadway ravaged by wildfire. With Lance LeGault, Joyce Payne and Lynn Shelton.