Good news and bad news for Will County employment 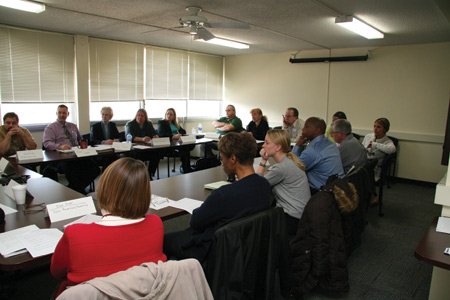 The Career Café Networking group is part of the Workforce Services Division of Will County and meets weekly to discuss job opportunities in the region, learn job searching techniques and discuss other employment related strategies.

Illinois ranks at the second from the bottom for its jobless rate compared to all other states, and Will County is the fourth from the bottom in Illinois, according to national labor statistics.

National unemployment figures just released by the U.S. Department of Labor’s Bureau of Labor Statistics show Illinois has the second worst jobless rate in the country at 9.2 percent with Nevada being at the bottom at 9.6 percent.

When broken down by counties, the jobless rate for Will County was 10.6 percent, ranking fourth from the bottom out of all Illinois counties.

While dismal, that number, according to Workforce Development Board of Will County Manager Pat Fera, doesn’t really paint the full picture of the county’s economic health.

“One of the things we see is that our unemployment rates have started to increase over the past few months,” Fera said.

Part of the reason for that, she added, is that more people are starting to re-enter the labor force and are now being counted in those unemployment numbers. Fera is referring to “discouraged” workers who had previously given up looking for employment and thus were not being counted among the unemployment figures. These are people who had essentially gone off the employment grid.

Now, some of those people are coming back to the workforce, Fera said.

“We think that’s happening because more employers are hiring,” she said.

For example, between May and June Will County’s labor force increased by 7,600 people, an hike of almost 2 percent. A normal figure is between 1,000 and 1,500 from one month to the next, Fera said.

“When 7,600 people enter the labor force in one month, that’s a really big number,” she said.

Fera could not account for the uptick in the labor force numbers.

“I think a feeling by job seekers that the economy is improving and there are more job opportunities opening up each month may have drawn many people back into the labor force,” she said.

“That is just my interpretation because we don’t ever get to see information on why that really happens.”

As a comparison, Illinois’ labor force grew by 1.2 percent from May to June, so Will County’s increased at a faster rate than that of the state, Fera said.

The only exception is January when the figures are seasonally adjusted for the prior year. Those figures are released in March and give much more data, such as a breakdown of the unemployed by race and gender.

“They need a whole year’s worth of data to release that information,” Fera said.

On a national level, black males still fared poorly in unemployment figures. According to the 2012 statistics, the unemployment rate was 15 percent for black men nationwide and 8.2 percent for white men.

“That is not unusual throughout the country,” Fera said. “During this recession, the unemployment rate across the U.S. has been higher for minorities and especially African American men.”

The only group hit harder during the recession, she said, was youth. A five year estimate (from 2007 to 2011) for youth ages 16 to 24 was 19 percent in Illinois, according to the Illinois Department of Employment Security.

Fera said her office does as much as possible to put people back into the workforce.

“We continue to provide youth and adults with both job search skills and training to help them get jobs in high-demand industries and occupations,” Fera said. “Our focus is on those industries that are growing.”