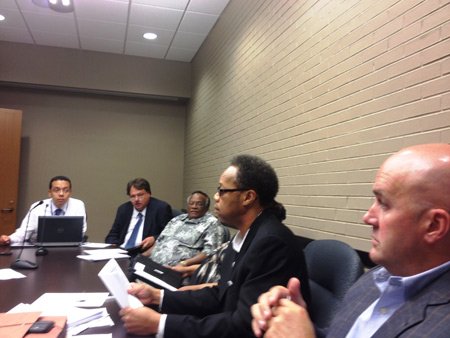 Eric Hanson (far right), attorney for the Housing Authority of Joliet, and HAJ interim CEO Michael Simelton (sitting directly next to Hanson) are seen at a meeting at the Joliet City Hall on Monday. Hanson had to cancel a meeting of the HAJ board on Thursday after staff failed to give proper public notice. Photo by Rex Robinson

The board had planned to meet at 4:30 p.m., but shortly after five of HAJ board members arrived, the board’s attorney Eric Hanson announced that the meeting had to be cancelled because it wasn’t posted properly.

HAJ board members had planned to meet to get up to speed on the issue of the HAJ’s Chief Financial Officer Charlene Potts being arrested by Cook County investigators Tuesday afternoon for allegedly embezzling money from the Chicago Housing Authority in 2005 and 2008.

As the meeting was about to get underway, Hanson advised the board to cancel the meeting after learning that the staff had not given proper public notice. Had the meeting been held, it would have been in violation of the Illinois Open Meetings Act.

Hanson and the HAJ’s interim Chief Executive Officer Michael Simelton then met with the board members two at a time privately.

“I’m really disappointed that such an important meeting had to be cancelled because of lack of attention to detail,” Hug said. “I’m sure they’ll be rescheduling a meeting and I will be attending.”

Quillman said she was on her way home from work when she got a call from one of the other city councilman about the meeting. She said she only went because she wanted to get up to speed on what was going with the HAJ following the arrest of Potts.

Hug said the first thing the HAJ board needs to address is the personnel issue in relation to the arrest, but the bigger picture is the HAJ’s finances.

While working for the CHA, Potts allegedly was writing checks to a bogus company and her estranged husband (who also was arrested) was then cashing them. Simelton said Potts was terminated from her position with HAJ on Aug. 6, the day of her arrest.

The HAJ's next regularly scheduled board meeting is at 4 p.m. Wednesday, Aug. 14.