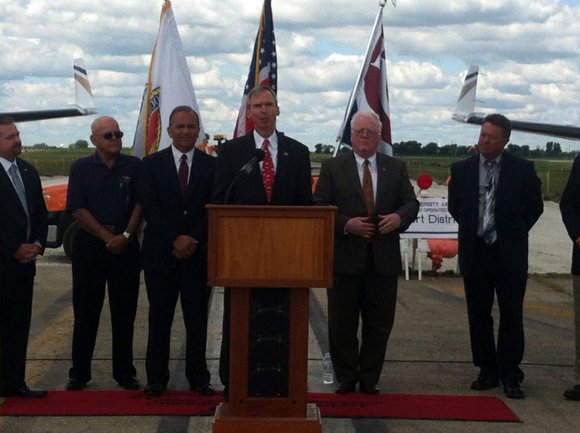 U.S. Rep. Dan Lipinski (IL-3) talks about the grant for the runway improvements at Lewis University Airport on Wednesday

U.S. Rep. Dan Lipinski (IL-3) along with Will County Executive Larry Walsh, Romeoville Mayor John Noak, and other village and airport officials to announce the start of the second and final phase of a $4.2 million runway reconstruction currently underway at Lewis University Airport.

Both phases of the runway project, expected to create 72 construction jobs and attract economic growth throughout the region, were made possible through legislation Lipinski helped to write and pass as the state’s senior member on the House of Representatives Transportation & Infrastructure Committee.

“I’m extremely pleased to have worked with local officials and Lewis University Airport so we could bring this important runway reconstruction to its finish,” said Lipinski, who sits on the Aviation Subcommittee. “These improvements are creating good construction jobs right now, but the new runway will only serve to enhance the airport’s capacity and generate more economic opportunity for local communities far into the future. I will always recognize the importance of Lewis

University Airport to the region and will keep working with the federal government so we continue to invest in its future.”

Through a $2.5 million dollar grant made possible by the Federal Aviation Administration reauthorization bill the congressman was instrumental in passing, work started this spring on the badly needed reconstruction of the eastern half of Runway 9-27, one of two runways at the airport and originally built in 1989. The FAA later awarded an additional $1.3 million so construction can start within the next few weeks on the 5,700-foot runway’s western half. That project also includes the installation of new airfield lighting to improve safety at the airport.

The new runway, anticipated to be completed in its entirety by this winter, will allow Lewis University Airport to better accommodate larger aircraft and future aviation growth, creating additional jobs and business development in the region.

The state and the Joliet Regional Port District each are contributing $211,311 to the project.

“Lewis University Airport is one of the top selling points for attracting jobs to Will County, one of the fastest-growing areas in the state and the country,” Will County Executive Larry Walsh said. “These improvements are much needed and appreciated. I wish to thank Congressman Lipinski for his work in Washington to see that the airport continues to generate economic development and play a vital role in Will County transportation.”

“We greatly appreciate Congressman Lipinski’s leadership in helping to make these improvements possible,” Romeoville Mayor John Noak said. “Lewis University Airport is an economic engine not just for the Village of Romeoville, but for the entire region. This project ensures that the airport will continue to draw jobs and businesses to our communities for years to come.”

Owned and operated by the Joliet Regional Port District, the Lewis University Airport accommodates more than 100,000 arrivals and departures annually. The airport serves numerous Fortune 500 companies and corporate aircraft, as well as Aviation Department at Lewis University, the only college aviation program in Illinois with an airport on its campus. Joining Rep. Lipinski at today’s event were Joliet Regional Port District Board Chairman Dan Vera, along with members of the Romeoville Village Board and officials from Lewis University.