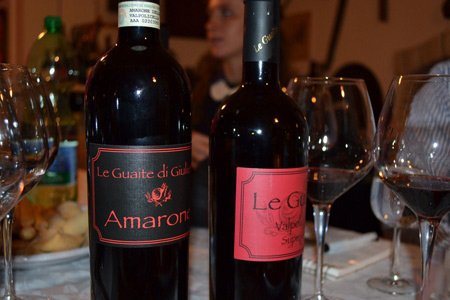 VERONA, ITALY - A spring-like sun bathed the snow-capped hills surrounding this jewel-box of a city, where the Capulets and the Montagues fueded and Renaissance kings wielded their sovereign swords in wealth and oppulence. More than a hundred producers of this Ruby-red liquid corollary to the Michelangelo marble mined in the majestic hills that comprise the Valpolicella, and a coterie of wine journalists, distributors and afficionadoes, descended upon the Pallaza della Gran Guarda in this most romantic of cities.

Amarone is the life's blood of northeastern Italy. It is one of the most prestigious wines of the world. Produced from indigenous grapes, with names that harken back to days that predate the Roman Empire; Corvina Veronese, Corvinone, Rondinella and ancient production methods which include the traditional natural drying of the grapes, or "passita", and traditional fortification techniques combined with modern technologies and fermentation processes, it is a wine of distinction.

Valpolicella is nestled in a lattice-work cradle of four separate valleys, the lush, fertile landscape is anchored by a large lake and punctuated by a veinous confluence of rivers and canals. The snowcapped Lessini mountains from which they descend are a climatic contradiction to the perfect growing conditions that exist below. Warm winds caress the vines, even in the dead of winter, with olives, cherries and wild rosemary intermingled with the vines, creating a cornucopia of rich flavors and colors.

Each valley has its own river. Roads replace rivers during the dry season, but it flows when the melting ice of the glaciers in the Lessini mountains nourish the fertile valleys below. The ancient towns add to the scenic mix. Mazzano, Torbe, Crosarea, Moron, San Peretto, the names literally roll off of the tongue. The only hint at the richness of the land and the vine. Historically, Valpolicella is known as "the splended country" and a tasting of the more than 200 wines assembled at the tasting tables at the Palazza della Gran Guarda in central Verona, across from the ancient Arena, is a testament to the dedication and artistry of the winemakers assembled there.

A brilliant sunshine greeted our party of journalists as we arrived at the Hotel Bologna in the heart of Old Verona across from the historic Arena and just a cobblestoned street walk to the central Plaza Erbe, near where the statue of Dante towers over the square. Shedding our winter coats, there was opportunity to explore the winding mews and flagstoned walkways and enjoy views of the river and its timeworn bridges. The final day brought a special treat, a billowing, rare snowfall fell upon the hills and vineyards of the Valpolicella creating a fantasy atmosphere.

Over the next several days, the producers will showcase their wines at Anteprima Amarone 2009. Ready to be put to the world market over the next several months, these wines are the product of one of the most successful decades in the Valpolicella's history. Production and quality have increased, as have the number of partnerships.

Wine’s success is measured also by its capacity of getting the economy of its territory of origin grow. This is what Amarone della Valpolicella has done in the last decade and what Anteprima Amarone next January 26th and 27th is analysing and celebrating. Protagonist of the tastings will be Vintage 2009, ready to be put on the market and, to celebrate this special edition of the event, all participating producers will present their best vintage of the last decade. Several aspects of this growth are the subject of seminars and roundtables that will be the topic of "Anteprima Amarone: history of a successful wine"