Board to be be reduced from seven to five members 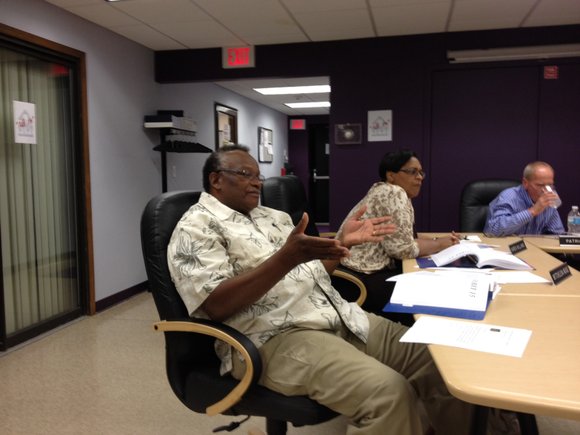 Ralph Bias (left) resigned his seat on the Housing Authority of Joliet Board Wednesday after he was found in violation of conditions for owning and renting Section 8 housing in the city by HUD. By Rex Robinson

Ralph Bias resigned from his seat on the Housing Authority of Joliet board Wednesday at the urging of the U.S. Department of Housing and Urban Development after he was found in violation of conditions in regards to his owning and renting of Section 8 housing in the city.

On April 2, the U.S. Department of Housing and Urban Development issued a letter granting a conditional waiver of conflict of interest for Bias so that he may be appointed to the board.

That appointment was made by Joliet Mayor Tom Giarrante, who said he thought because Bias owned Section 8 housing he would be good for the board because he has a background in public housing.

Bias’ appointment to the board was approved by HUD, but the department stipulated three conditions. Bias was to recuse himself from all matter related to the operation of the HAJ’s Housing Choice Voucher Program for a period of six months after the expiration of his last Housing Assistance Payment Contract with the HAJ. He also was neither to renew nor enter into any new HAP contracts with HAJ and the HAJ was ordered not to perform Housing Quality Standard inspections on any new HCV property owned by Bias.

“A review of the HCV Program annual recertification for the HAG shows that Mr. Bias has had eight HAP contracts renewed since our granting of a conditional waiver allowing his appointment to the Board of Commissioners,” Steven E. Meiss, director of the Illinois State of Public Housing, wrote in a letter to Giarrante received on Wednesday.

“The renewal of these eight HAP contracts constitutes a violation of the conditions of the waiver of conflict of interest for Mr. Bias. Based on this information, our office is asking for you to reconsider the appointment of Mr. Ralph Bias to the Board of Commissioners for the HAJ.”

At Wednesday’s HAJ board meeting just before Giarrante read the letter to the board, Bias announced he would step down. More than 40 people were in the audience.

“I am landlord and a Section 8 landlord,” Bias said. “As per Section 8, as per HUD, there’s a conflict of interest. I can no longer hold this seat.”

Giarrante said Bias was making a concerted effort to meet the conditions stipulated by HUD, but it would have required not renewing contracts with tenants and thus making them move and selling his property very quickly and losing money.

“Mr. Bias did a great job,” Giarrante said outside the meeting. “I hated to see him leave, but I understand HUD’s concerns.”

HUD also wants the HAJ to go from a seven member to a five member board. Former Board Chairman Susan Barber, a District 4 Joliet City Councilwoman, resigned from the board earlier this month after the HAJ’s former Chief Financial Officer Charlene Potts was arrested for allegedly embezzling money from the Chicago Housing Authority in 2005 and 2008. Barber has since stated her resignation from the HAJ board had nothing to do with Potts’ arrest.

Now with Bias’ resignation, the HAJ has only five members. However, it is still technically a seven-member board until Giarrante makes the official change to a five-member board, according to the HAJ’s attorney Eric Hansen.

After Bias resigned, the board adjourned to its regular annual meeting and appointed new officers. Roger Powell Sr., was made chairman. Lorraine Guerrero was made vice chairman. Karen Williams was made secretary and Mittchelena Mead was made treasurer.