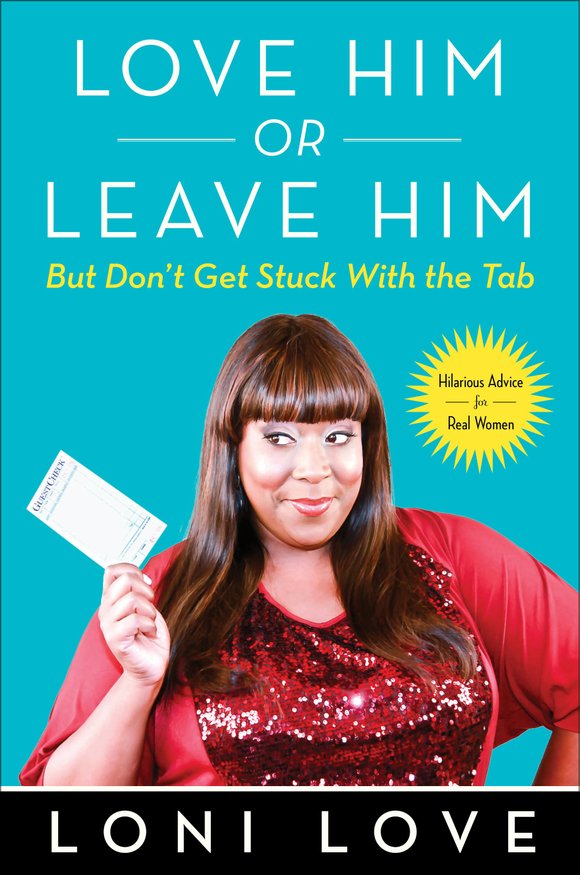 The man you love obviously speaks a different language than you speak.

How else do you explain that you can see the fool’s lips move but you can’t understand a single thing he says when he says you’re the only one for him, he was at his Mama’s (til 3am), he looooves you? He’s talking some other language that you don’t (and don’t want to) speak.

Maybe it’s time to leave him. Then again, maybe not - you can’t decide. Or maybe you need real advice, which you’ll find in “Love Him or Leave Him But Don’t Get Stuck with the Tab” by Loni Love.

When Loni Love was a teenager, she had a BFF named Peaches who had poor taste in men: Peaches was sure her “businessman” boyfriend was successful and wealthy; Love knew he was slinging crack. She tried to warn her friend but one night, Love heard gunshots and soon afterward, she did seventeen-year-old Peaches’ hair one more time – for her funeral.

Peaches’ death taught Love that too many women sacrifice too much to be with a man. And so when Love decided to leave an engineering career to become a comedian, she made it her “personal mission” to remind women to put themselves first, which is the most first and most important step in finding a relationship.

Love says she enjoys going on first dates because they’re great opportunities to gather information and get a free meal. After the first date, she says, move forward cautiously and be prepared: smart women stay safe.

Think twice before confessing your past, sharing guilty feelings, or moving in together. Know when it’s time to break up with your man (and how to do it), know how to get over him and move on, and know when it’s time to tap into your “Detroit Debbie.” Learn the only reasons for giving a guy a second chance. Get advice on dealing with his Mama, his kids, his kids’ Mama, and his friends. Memorize Loni Love’s Signs of a Faithful Man, so you know when he’s not.

Finally, remember: if it makes you happy… do it!

There are really two reasons to love “Love Him or Leave Him But Don’t Get Stuck with the Tab.” Number one, it’s funny. And number two, though some of the advice is meant in jest, most of it’s quite useful.

There’s no wallowing in man-misery allowed when you’re reading this book. Author and comedian Loni Love speaks bluntly and truthfully while advocating that women stand up for themselves, take back their strength, and stop being wimpy - whether they’re in their first romance or their fiftieth. Along the way, we meet Love’s ex-loves, her wild and clueless friends, and her bawdy, wonderful sense of humor.

If you’re dating, mating, situating, procreating, or tired of relationship drama, then this book may give you what you need to get your mojo back. If that’s you, then grab this book because “Love Him or Leave Him But Don’t Get Stuck with the Tab” speaks your language.