Pet snakes: Slithering their way into your heart 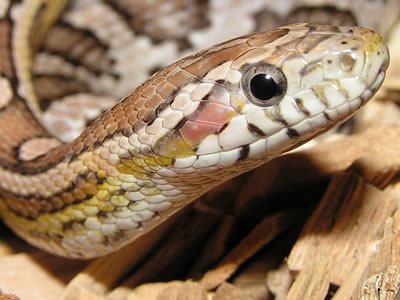 For some animal lovers, watching these exotic creatures slither across the Animal Planet screen isn’t enough; you want to bring the thrill of snake ownership into your own home. While they seem exciting and manageable through a television screen or from behind a glass wall, there are a few things that every aspiring snake owner must be aware of before bringing these exotic creatures into your home.

The most common snakes kept by enthusiasts are cornsnakes, kingsnakes, and ball pythons. Many of these snakes, like the corn and king, are well suited for older children and first time snake owners due to their simple feeding methods and docile temperament. However, some species reach very large sizes in captivity, and their considerable space requirements must be anticipated.

“Other popular snakes like boa constrictors and carpet python are better for an owner comfortable with larger snakes, as they often get 7 or more feet long,” explained Dr. Jordan Gentry, Zoological Medicine Resident at the College of Veterinary Medicine & Biomedical Sciences. “Green tree python, rainbow boas, and tree boas have slightly more specialized care and are less tolerant to handling, but can make great pets for an owner that has researched the species.” Large constricting snakes, venomous snakes, and snakes with difficult care requirements do not make suitable pets and should only be kept by experienced herpetologists.

Doing research on the individual snake species you are interested in will provide you with husbandry recommendations, including environmental, sanitation, and dietary considerations. “The habitat for the snake depends entirely on the species of snake, as some are from an arid environment that does not require as much humidity as a snake from a tropical environment,” said Gentry. “Most captive habitats attempt to mimic the natural environment of the animal with sand, rocks, and live plants; however, less natural paper substrate and plastic hide containers allow much easier cleaning and may actually be more beneficial to the animal’s health.” As for feeding requirements, almost all pet snakes should be on a whole prey diet of pre-killed rodents, such as mice or rats.

Health and sanitation are also considerations that shouldn’t be overlooked when choosing your pet. “Hygiene is important,” said Gentry. “Salmonella is a bacteria that can be carried by pet reptiles and can be transmitted to humans; so washing hands is recommended after handling a pet snake.”

Though there are many snakes that make suitable pets for adults and children alike, the safety of owning a snake as a pet is sometimes called into question by events that are widely reported in the media. Just recently, two young boys were allegedly strangled to death while they were sleeping by an escaped pet python.

“It is significantly less common for a snake to harm its owner in any way than for a dog; in fact it is almost unheard of outside of rare misguided media reports,” said Gentry. “Approximately 2% of the US population is bitten by a dog every year, leading to more than 30 deaths per year. Large constrictor snakes have killed fewer than 20 people in the United States since 1978.” Gentry explained that the most common causes of a pet snake to bite is a feeding error, where the snake missed the food item and bit the owner’s hand, or a handling mistake where the snake clearly demonstrated its intent to bite, but was handled anyway.

Whether you’re a dog lover, cat fanatic, or reptile enthusiast, there will always be risks to consider when brining a pet into your home. It is your responsibility to thoroughly research them and be aware of the requirements and necessities that they entail. “The human animal bond with any pet should not be underestimated,” said Gentry. “The risks of owning a pet snake are no greater than owning a dog or cat and absolutely do not outweigh the benefits.”