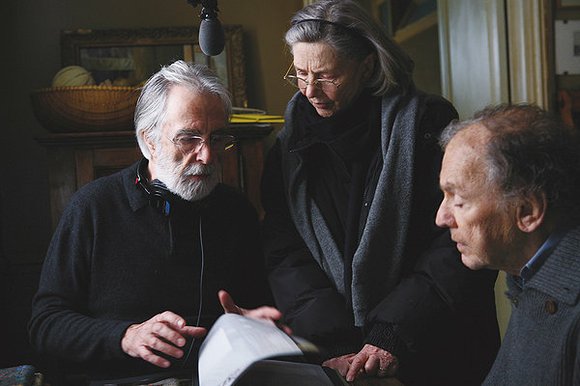 Retired music teachers Georges (Jean-Louis Trintignant) and Anne (Emmanuelle Riva) have been married for over 60 years. But the frail octogenarians’ love for each other remains as strong as the day they met.

The elderly couple lives in a Paris apartment surrounded by music and art and other indicia of an appreciation of culture. Unfortunately, with Anne’s health in sharp decline, their days are now mostly spent attending to her host of medical issues.

For, she’s basically been bedridden since a stroke that left her right side paralyzed. And the poor woman’s biggest fear is not death but the prospect of returning to the hospital or being moved to a nursing home.

It’s clear that doting Georges is so devoted that he would prefer to abide by his wife’s wishes. However, he’s no spring chicken either, and she’s gradually becoming more than he can handle as her health deteriorates. They do have a daughter, but Eva (Isabelle Huppert) is a travelling musician who can only visit occasionally because of her hectic touring schedule.

So, when it becomes obvious that Anne has passed the point of no return, Georges finds himself on the horns of a dilemma. Does he abide by his life mate’s last request and let her live out her days in the familiar confines of home, or does he resign himself to the fact that he can no longer provide the quality care she so dearly needs to survive?

That is the crux of the critical question explored in Amour, a bittersweet romance drama which won the Academy Award earlier this year in the Best Foreign Language Film category. Written and directed by Michael Haneke (The Piano Teacher), the flashback flick was deservedly nominated for five Academy Awards in all, including Best Picture, Film, Director, Lead Actress and Original Script.

A poignant tale of undying love.

DVD Extras: The Making of Amour; Jean-Louis Trintignant talks about Amour; and an introduction by Philippe Rouyer; and the theatrical trailer.


To see a trailer for Amour, visit: http://www.youtube.com/watch?v=U5Hr3eJc88w