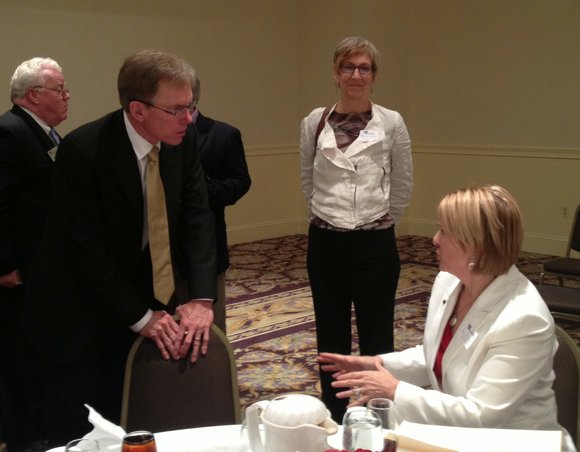 IDOT Secretary Ann Schneider (far right) is seeing talking with Will County CED President and CEO John Grueling at a Joliet Chamber luncheon earlier this summer. Schneider and Steve Schilke, also of IDOT, are scheduled to speak to Will County Board members about the third airport and Illiana Expressway projects Tuesday morning.

Illinois Department of Transportation officials plan to attend a Will County Leadership meeting Tuesday morning to discuss the proposed South Suburban Airport and the Illiana Expressway.

IDOT Secretary Ann Schneider will be on hand to discuss the South Suburban Airport project, while Steve Schilke, Illiana Expressway project coordinator for IDOT, will discuss the proposed new expressway. The meeting is scheduled for 11:30 a.m. in the board room of the Will County building, 302 N. Chicago St., Joliet.

John Greuling, president and Chief Financial Officer for the Will County Center for Economic Development, sees these two projects as vitally important to the county’s economic future.

“The infrastructure obviously is very important to all of us. If we’re going to be successful in job creation we have to provide the platform for businesses to succeed,” Greuling said recently at a Joliet City Council meeting.

Meanwhile, State of Illinois has given IDOT the green light to enter into a private partnership to begin the process of getting the airport built.

Will County officials are eager to get updates from Schneider and Schilke about both projects.