Will County gets update on major road project from IDOT 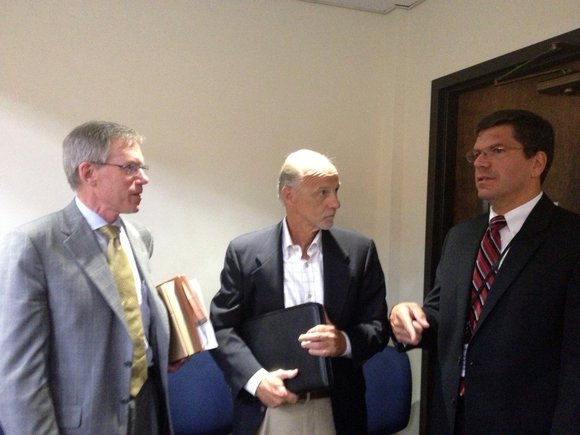 Will County Center for Economic Development President and CEO John Greuling (from left), Brent Hassert, lobbyist for the Will County Board, and John Fortman, IDOT engineer, talk about the Illiana Expressway project after Tuesday’s Will County Leadership Meeting. Photo by Rex Robinson

The speed at which the Illiana Expressway project moves forward hinges on a vote early this fall by the Chicago Metropolitan Agency for Planning, according to an engineer for the Illinois Department of Transportation.

John Fortman gave Will County Board members an update on the proposed 47-mile road project at a leadership meeting held Tuesday.

CMAP does all the planning for all major infrastructure projects in Northeastern Illinois and the Illiana Expressway is not on the agency’s fiscally constrained project list.

“In order for us to get a record of decision on the Illiana, it has to get to the fiscally constrained plan so that is our next big step,” Fortman said, adding that a “rough” estimated cost for the project came to $1.25 billion, $950 million of which would be Illinois’ responsibility, with Indiana being responsible for the rest.

The CMAP vote is scheduled for Oct. 9. “That the next step,” Forman said.

Meanwhile, other planning portions of the project are moving forward. IDOT has $10 million set aside in its fiscal year 2014 budget for land acquisition to make way for the expressway. Fortman said IDOT will need to acquire approximately 250 parcels for that purpose.

John Greuling, president and Chief Executive Officer of the Will County Center for Economic Development, has been in contact with mayors and other governmental officials from municipalities in Will County and beyond and others and has asked that they send letters supporting plans for the Illiana Expressway to CMAP. He sent a “call to action” e-mail to 450 people asking them to send an e-mail to CMAP and voice support for the project. Greuling also has been in direct contact with CMAP.

“I spoke to them this morning,” Greuling said after Tuesday’s meeting. “We will continue to fight to get it on the project funding list and so will IDOT.”

Should CMAP vote against putting the Illiana Expressway on the constrained list at the Oct. 9 meeting, Greuling said it will slow down the progress, but emphasized that it will in no way kill the project.

“The project doesn’t go away, but it doesn’t move forward as quickly,” he said. “Our hope is that we get it done this time.”

If that doesn’t happen, Greuling said he would lobby CMAP again in the future to once again try to convince the agency to put the project on the list.

County board member Jim Moustis (R-Frankfort), and Republican Caucus Chairman for the board, said he sees the Illiana Expressway a project that is more important to the county, at least in the short term, than the proposed third airport in Peotone.

While Fortman in no way downplayed the importance of getting CMAP to support the Illiana Expressway project and the high priority of getting the project on the constrained list, he also said there is much support for the project in Springfield and both in Will County and beyond.

County Board member Don Moran (D-Romeoville) expressed concern about what will happen in the near future as the economy improves and Will County continues to grow and the Illiana Expressway project lays dormant.

“Without the Illiana, it’s just going to increase the gridlock,” Moran said.

Another road IDOT project underway in Will County outlined by Fortman included plans for an expanded interchange at Interstate 55 and Weber Road. This interchange is considered one of the busiest in the state. The widening project is expected to cost an estimated $90 million.

“We have plans for a public hearing in October of this year,” Fortman said. “This project will be entering into the design phase.”