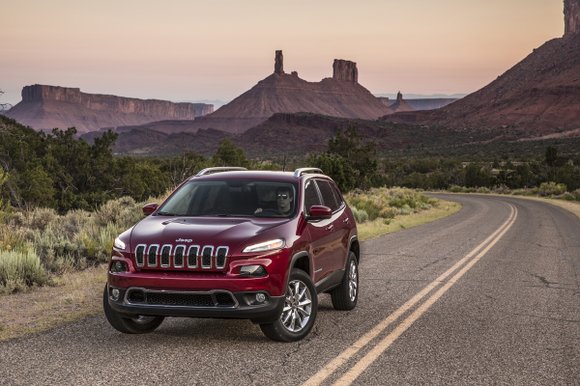 Purists are grumbling about the all new 2014 Jeep Cherokee.

Its curves, bent seven-slot grille and overall sleekness are not Jeep the complaints go. But the very characteristics that purists are complaining about are the attributes that most likely will make Jeep’s Cherokee a hit.

The hood was a waterfall design and with a peaked seven slot grille it was a one piece effort that helped insure a quality build. The daytime running lights looked like headlights and the headlights looked like fog lamps. The 2014 Jeep Cherokee had a steeply raked windshield and of course it had Jeep’s iconic trapezoidal wheel openings.

In the back, there was a rear spoiler, LED tail lamps and rear fog lamps. It was a clean design. The 2014 Jeep Cherokee looked good. Designers wanted to get away from the box look of the old Jeep Liberty that the new Jeep Cherokee will replace as well as the flat sided look of Cherokees past.

They succeeded. In an area dotted with all sorts of exotic and expensive automobiles, the Cherokee made heads turn in Southern California. But despite its curves the mid-size sport utility is a Jeep; that means it lived up to the brand’s off road tradition.

Buyers have a choice of three four-wheel-drive systems. All three featured a rear-axle disconnect to improve fuel efficiency when 4X4 is not necessary.

The four-cylinder engine mated to this gearbox, which can be shifted manually, gets 31 mpg in the city. Trim lines are the Sport, the Latitude, the Limited and the trail rated Trailhawk. Base prices start at $22,995 for a 4X2 Sport to $29,495 for a 4X4 Trailhawk.

We first got into a 2014 Jeep Sport 4X2 equipped with the four cylinder engine. In other words, this was the entry level model and we were really impressed. The cloth interior was black; Jeep has subtly changed from a center stack dominated interior to a central control pod area.

The dash was lower. Combined with the raked windshield the passenger compartment was airy, sight lines were expansive, the Cherokee felt more like a car even though the seating position was higher it wasn’t pronounced.

Even more impressive was how well the four-cylinder engine that is branded Tigershark MultiAir handled the terrain. The engine worked to get up and down through the canyons here. But it didn’t work hard. The mountainous twisting two lane roads of Southern California can be a graveyard for four cylinder engines but the normally aspirated Tigershark engine barely burped as it powered the 2014 Cherokee up and over as well as through these mountains.

The same was true of the automatic transmission. Cherokee’s new nine-speed gear box never wavered. Gear selection was decisive, it held gear going up and down the steep descents when it was supposed to and it did so smoothly without any hitches.