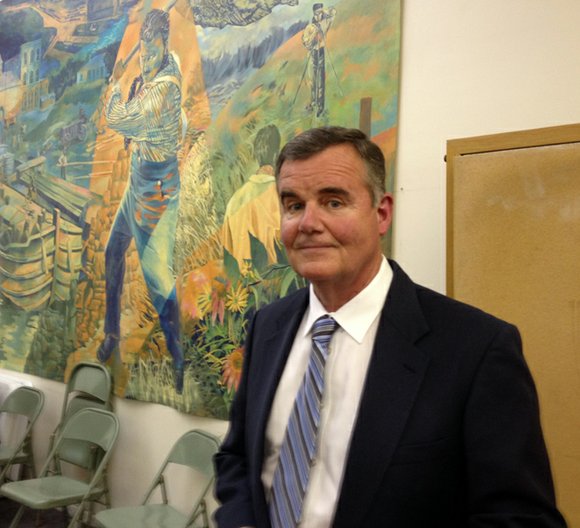 Streit broke a 4-4 tie vote of the city council to appoint retired Illinois State Police Lieutenant Colonel Terrence Lemming as the city’s next police chief, replacing Acting Chief Dave Draksler. Draksler had been in the position for about a year, following the retirement of former Chief William Kendziora.

Dave Draksler (right) stands with supporters in the hallway outside of the Lockport City Council chambers after the council voted 5-4 to appoint a new police chief, in effect replacing him.

More than 50 of Draksler’s supporters showed up at the meeting and were disappointed with the council’s vote. Draksler will now become the department’s deputy chief.

Kim Hartley, a friend of Draksler who worked with him for 13 years, said Draksler has been doing the job of chief and two lieutenants for the past year. She warned that by not appointing Draksler to the chief position there would be a decline in morale within the department.

“I understand that appointing Chief Draksler may not be the popular decision among some of your fellow council members,” Hartley said. “But you as a leader need to have the courage and the integrity to make the right decision, not the popular one.”

Lemming, who lives in Lemont, has been with the Illinois State Police since 1989, and before that was with the Burbank Police Department. He was one of six finalists interviewed by a panel of three current and retired police chiefs from the Illinois Association of Chiefs of Police. The city’s administration hired the organization at the request of Streit to help the city council find its next police chief.

Draksler also was among the six finalists. However, the panel recommended the city go with Lemming. Each finalist went through an interview process that involved interviews, mock drills and written exams and Lemming scored the most points out of all the candidates.

Marynowski agreed Lemming was a “polished” candidate who scored well in the interview process, but she favored Draksler because of his knowledge of the city.

“Just because someone scored the highest, doesn’t make him a right fit for Lockport,” she said.

Vandermeer and Marynowski were among the few council members who sat through the interview process. Vandermeer said he took copious notes along the way and found the process to be “extremely thorough and fair.”

Council members opposed to Lemming’s appointment said they did not like that Lemming, who retired from the Illinois State Police and receives a $130,000 a year pension, will now also receive a salary of about $120,000 with benefits from the City of Lockport.

Turner said Lemming will be making more than $250,000 a year, almost $70,000 more than the governor. He also disagreed making Draksler the deputy chief was a fair consolation.