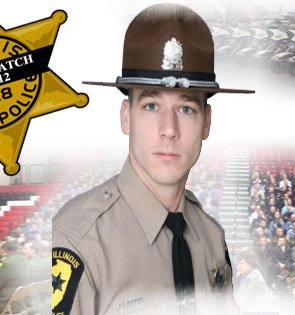 Illinois Trooper Kyle Deatherage was killed in the line of duty on November 26, 2012, while conducting a traffic stop.

Illinois State Police districts statewide, including District 5 through Will County, have launched a special holiday travel enforcement memorial operation dedicated to fallen Trooper Kyle Deatherage, who was killed in the line of duty on November 26, 2012, while conducting a traffic stop.

All ISP sworn personnel are committed to working Operation Kyle, and aggressively patrolled Illinois roadways for 24 consecutive hours on Nov. 26 and Nov. 27 in remembrance of the fallen trooper.

“There is no greater tribute than the commitment of all sworn officers showing their respect, dedication and commitment to Kyle and the safety of every driver and passenger during this 24 hour period,” said ISP Director Hiram Grau. “His life was tragically taken from his family and police family two days before Thanksgiving and Operation Kyle will be a strong reminder to the motoring public that safe driving saves lives.”

Traditionally, the Thanksgiving holiday marks the beginning of the busy holiday driving period, and continues through the New Year.

ISP officials expect high traffic volumes on interstates and roads throughout the region through the holiday season.

“Operation Kyle will kick off the enforcement period, and officers will saturate the interstates, conduct road side safety checks and participate in other traffic enforcement details to identify ISP Fatal Four moving violations. A special emphasis will be placed on DUI enforcement and holiday DUI patrols will be designated statewide,” said ISP Division of Operations Colonel Michael Zerbonia.

“Our number one goal during this 24 hour enforcement period, and through the holiday season, is to raise awareness and reduce the number of fatalities on Illinois roads and highways. Sobriety checkpoints will also be enforced and DUI violators risk arrest and severe penalties,” Zerbonia added. Officials also stressed that fines have increased to $120 for texting while driving.

Motorists who consume alcohol should consider an alternative means of transportation. A DUI arrest can cost thousands of dollars in attorney fees, court costs, insurance fees, fines and jail time. A DUI arrest can result in a permanent criminal history record.

Weather conditions can also be a factor, and Illinois State Police urge motorists and out-of-state visitors to plan ahead, follow the rules of the road, and take the necessary safety precautions during this holiday driving season.