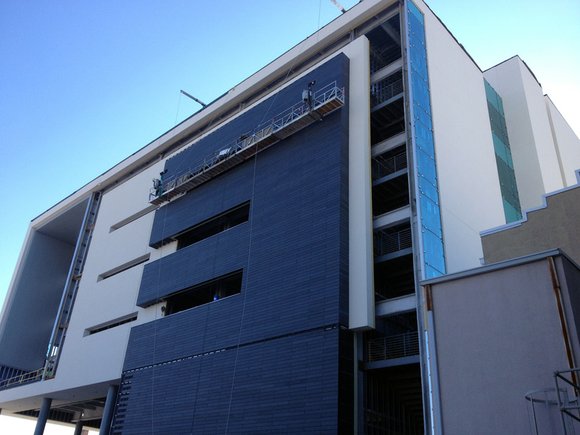 Workers are finishing up the exterior of the new Joliet Junior College City Center Campus building. Photo by Rex Robinson

The exterior shell of the new six-story Joliet Junior College City Center Campus is just weeks away from being completed.

City and state elected officials along with staff from Joliet Junior College on Tuesday toured the new city center campus in Joliet's downtown.

Local and state elected officials joined college staff and board members Tuesday for a tour of the new $57 million building in downtown Joliet guided by the contractors and the architect for the project. The new city center campus will house JJC’s culinary arts program, featuring a restaurant on the first level, as well the college’s adult education programs.

The college still needs another $25.5 million to complete all the interior work on the new campus center, which looks to be the tallest building in all of Joliet. A look out from the sixth floor of the new building says it all.

A spokesman for Gov. Patrick Quinn’s office told The Times Weekly earlier this summer that the state did not have the remaining $25.5 million promised to complete construction of the new building, but if funding were to become available for a new Capital bill, JJC’s project would be first on the list to receive the funding. Without that money from the state, the project could be stalled.

Part of the reason for Tuesday’s tour of building was to not only show local and state leaders the progress made on the new campus center, but also to drive home the need for the state funding to get the building completed. The $25.5 million is needed to complete the inside of the building.

The college’s hands are tied to an extent because the state has provided some of the funding up until this point.

“If we initiated (the interior) work, even with our own money, we would lose the $25 million,” Mihelich said.

The college, he added, is working with McGuire and other state officials, exploring other options that might enable the college to continue ahead with the interior work and get reimbursed from the state at a later date.

“We’re losing out on all these learning opportunities for students without that building being done,” Mihelich said.

The passage last week of a pension reform bill by the General Assembly, according to McGuire, could “break the log jam.

“I look forward to the state’s credit rating improving due to action on pensions. That could enable passage of the Capital bill to fund school and infrastructure construction,” McGuire added. “My Will County colleagues and I will continue to work to have the JJC City Center Campus funded in the next Capital bill.”

College officials have said the interior work and final completion of the building is slated for sometime in 2015. However, again that will all depend on when money becomes available.