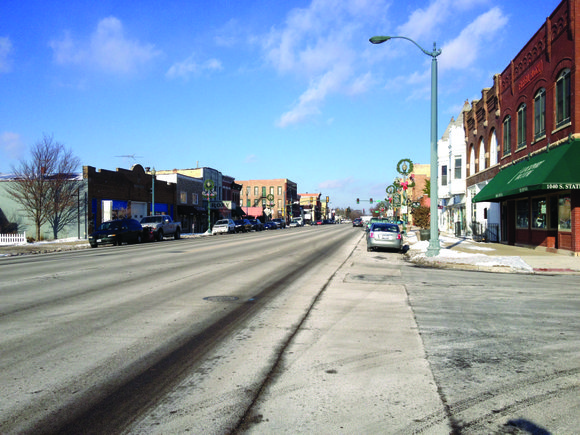 Lockport city officials are working with the Illinois Department of Transportation to make improvements to portions of State Street to make the downtown more pedestrian friendly. Photo by Rex Robinson

The business, she added, just needs more space. The store ships candies all over the country. Carlson said she and her daughter are working with the mayor and other city officials to help them with their “growing pains.”

All the employees at Hollingworth are retired and the youngest is 70. When customers walk through the front door the first thing they see is 92-year-old Sam Krestel feeding trays of toffee into a chocolate coating machine. Carlson estimated that the shop makes 300 pounds of toffee per day during the peak season, which runs from September to the end of December.

Frank Degrassi (right) is owner of Mama Onesta's at 1100 S. State St., in downtown Lockport. He is pictured with server Sara Bonko (left) and his wife, Mary.

Frank and Mary Degrassi owners of Mama Onesta’s Italian Restaurant, 1100 S. State St., were attracted to the historic look of the building when they decided to open their restaurant in downtown Lockport six years ago.

Frank Degrassi said he just would like to see more businesses move into the downtown.

Another business owner has a completely different view of downtown Lockport.

Canal Days, the city’s annual summer festival, is held in the city’s downtown, however, Cornolo said people only stop in during the festival to ask if they can use his washroom.

“I don’t get any business from canal days,” he said.

Cornolo said both the Lockport Chamber of Commerce and the city could do more to help promote downtown businesses.

Jim Mottl Jr., who owns Smith’s Barber Shop at 809 S. State, said he would like to see a nice old fashioned deli and maybe a women’s apparel store open up in the downtown. He also would like to see something done with the abandoned, boarded up building.

“They should demolish it,” he said.

However, Mottl said he does like being in downtown and has a good customer base.

Jim Wartenberg, owner of Marchio Tile & Carpet near 9th and State, said he too likes the downtown district and also enjoys the nightlife from the various bars and restaurants.

“It’s a safe place and people are nice,” he said. “I think it should be marketed as an entertainment destination.”

Wartenberg said he does not look to the city or the chamber to grow his business and it is not the city’s job to rent space for the owners of downtown buildings.

As a way to attract more development to downtown Lockport, Benson has been in discussions with Mark Harmon, executive director of the Gaylord building, and Artspace, an organization that runs a network of 33 affordable art facilities in 13 states to help transform the downtown by creating loft spaces in some of the downtown buildings for artists and musicians. While the plan could take some time to come to fruition, Benson and other officials see that as a possible way to draw more interest in the downtown.