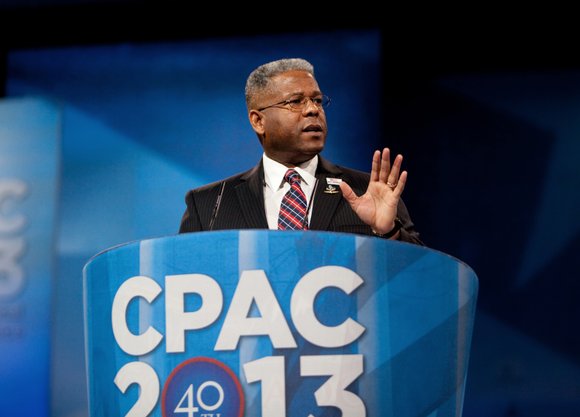 "The significance of Black History month is immeasurable. When I look at who I am, it is all about black history. When I first put on my army uniform, I go back and remember the 54th Massachusetts Regiment because those were the first black soldiers that was able to wear the uniform of the United States of America. I think of all of the black soldiers, sailors, airmen marines that went on and enabled me to be able to put on that uniform."

"When I think about the most poignant moment in black history, it’s very simple. My elementary school was right across the street from Ebenezer Baptist Church. Every single day, I walked by Ebenezer Baptist Church. Every single day, I got to see the resting place of Dr. Martin Luther King Jr. His impeccable words that he would hope for a country where young men and women would not be judged by the color of their skin, but the content of their character; that’s the most poignant moment, the most poignant memory that I have when talking about black history month. I was walking, each and every day, looking at black history when I walked past Ebenezer, when I walked down Auburn Ave, I saw black history. So that’s why we have to have this month. That’s why we need to have this reflection."

Allen West was born and raised in Atlanta, Georgia in the same neighborhood where Dr. Martin Luther King, Jr. once preached. He is the third of four generations of military servicemen in his family.

During his 22 year career in the United States Army, Lieutenant Colonel West served in several combat zones: in Operation Desert Storm, in Operation Iraqi Freedom, where he was a Battalion Commander in the Army’s 4th Infantry Division, and later in Afghanistan. He received many honors including a Bronze Star, three Meritorious Service Medals, three Army Commendation Medals and a Valorous Unit Award. In 1993 he was named the US Army ROTC Instructor of the Year.

After his retirement from the Army in 2004, Allen taught high school for a year before returning to Afghanistan as a civilian military adviser to the Afghan army, an assignment he finished in November 2007.

In November of 2010, Allen was honored to continue his oath of service to his country when he was elected to the United States Congress, representing Florida’s 22nd District. As a member of the 112th Congress, he sat on the Small Business and Armed Services Committees and was instrumental in passage of the 2012 National Defense Authorization Act.

He is a Fox News Contributor, a Senior Fellow at the London Center for Policy Research, and regularly writes for numerous media outlets including Communities at the Washington Times and PJ Media.

Allen is an avid distance runner, a Master SCUBA diver and motorcyclist. His wife, Angela, holds an MBA and Ph.D. and is a financial planner. His older daughter, Aubrey, attends college in south Florida, and his younger daughter Austen, is in high school.