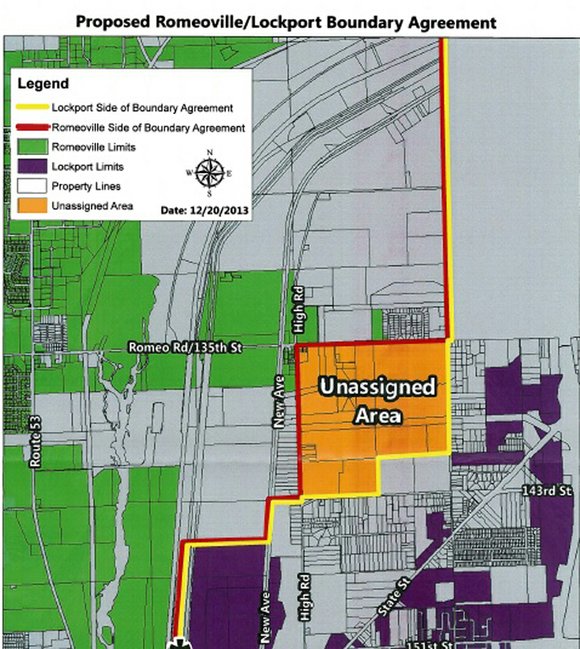 This map shows the new proposed boundary line between Romeoville and Lockport.

Lockport and Romeoville officials have approved a new boundary agreement, something that has never been done in the history of the two neighboring municipalities.

“I was shocked to find that out,” Lockport City Administrator Ben Benson said. “We’ve got existing boundary agreements with Homer Glen and Lemont, but not Romeoville.”

The Romeoville Village Board and the Lockport City Council both voted on the new boundary agreement at separate meetings held Wednesday night.

Many think the general boundary between the two municipalities is the Illinois and Michigan Canal, but that is not true and, in fact, there are parcels on the west side of the canal that are in Lockport.

“Neither one had a need, but now we’re both starting to have some structured development,” Benson said.

Earlier this fall Benson received a phone call from Romeoville Village officials in regards to Hansen Material Handling Services along Illinois Route 53, west of the I&M Canal, in Romeoville. The owners of the company, according to Benson, wanted to expand their business but found part of the property was in Lockport.

Meanwhile, Lockport had a similar problem with what is known as the Grogan/Reprosh parcel just north of 143rd Street. A portion of that land is in Romeoville, but the developer wants to be in Lockport and one day could possibly develop the parcel into a mix of commercial and residential, according to Benson.

That led to series of meetings later in the fall where officials of the two communities began working on a boundary agreement. The new boundary agreement will allow both municipalities to grant those developers what they want, Benson said.

One area, for now, is going to be left “unassigned,” because neither community has been approached by a developer looking to do something with it. The land is about five square miles near the Big Run Golf Course, south of 135th Street, north of 143rd Street, west of New Avenue and East of High Road. That land will for the time being be left unincorporated.

The new boundary agreement will enable both municipalities to know which will be providing sewer, water and other municipal services to the specific areas in question, according to Benson, who credited both Romeoville Mayor John Noak and Lockport Mayor Steve Streit with working together on the new agreement.

“The boundaries we have agreed upon, I believe, are fair and equitable to both municipalities,” Benson said.