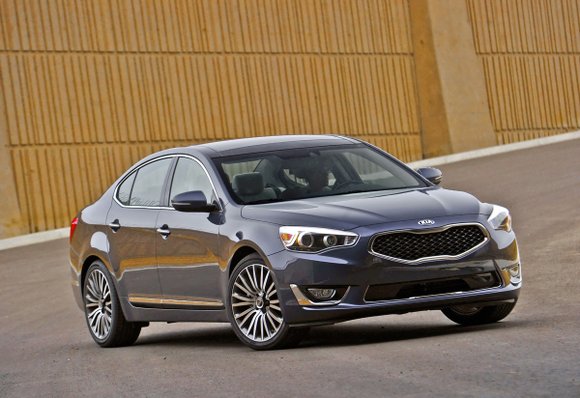 What appeared to be a Kia Optima was sitting in front of the L’Auberge Resort and Spa here but it was bigger; it was a full size sedan. The 2014 Kia Cadenza is the latest nameplate being introduced by Kia.

But it begs the question why. Kia is one of the most envied automotive brands in the marketplace. For at least the last five years sales have been through the proverbial roof. Almost every new product that the Korean automaker has introduced has been wildly successful.

And now with the Kia Cadenza, the automaker is serving notice that players in the full-size sedan segment are not safe either. Kia thinks there is a gap opening up between full-size mainstream sedans and luxury sedans.

The Cadenza, with base prices of $35,900, $38,900 and $41,900 depending on the option package, is Kia’s bid to fill that gap. Kia showed a chart with the Cadenza’s competitive set of vehicles and according to the automaker, the Cadenza cost less by several thousand dollars in most cases. That too keeps pace with Kia’s penchant for offering more for less than competitors.

The front-wheel-drive Cadenza had a 293 horsepower direct injection V6 that made 255 pound-feet of torque and it was mated to a six-speed automatic transmission. The car’s wheel base is two inches longer than a Kia Optima; overall the Cadenza is five-inches longer and one inch taller. Simply put, it is a bigger car.

Kia is pitching the Cadenza as a premium sedan and it had all the fixings to qualify: The car can be equipped with blind spot detection, a rear view camera, a 12-speaker 550 watt audio system is standard, adaptive cruise control, a smart key, lane departure warning and a panoramic roof is some of the stuff available on the Cadenza.

Perhaps best of all is the service package. Kia will provide complimentary factory scheduled service appointments for the first five visits that will remain enforce for 36 months or 37,500 miles.

The test drive route went through rolling hills north of here into the wine country, inland and then out and onto the North Coast Highway. The rural highways here are some of the most scenic anywhere. But the two lane torturous twisting undulating highways also test chassis stiffness, engine torque and power, automatic transmission gear selection as well as handling and suspension prowess. This is especially true for small lightly powered cars as well as full-size sedans like the 2014 Kia Cadenza.

The car was quiet; there wasn’t even much wind noise. Gear selection was sure slotted, in fact, unless under aggressive acceleration, you couldn’t feel the Cadenza shift gears. It was a very smooth powertrain. And the engine didn’t work that hard getting up and over the hills.