School of Rock opens in Plainfield 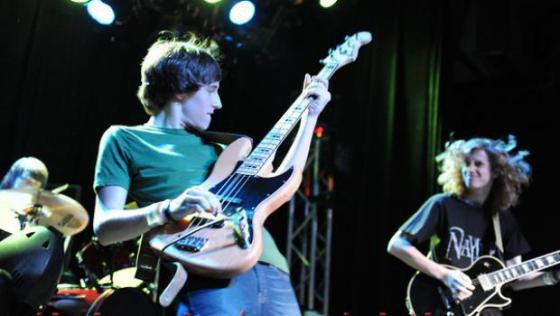 Back in the 1950s, many parents feared that Elvis Presley’s swiveling hips and rock n’ roll swagger would corrupt their children.

Very few probably could have imagined a day when future generations would drop their teens off at a place like the Plainfield School of Rock which recently opened at 24026 Lockport Street downtown.

The new school, a privately-owned franchise, was opened by Oswego native Jason Fein, a rock devotee, and occasional singer, guitarist in his own band, The Run Around.

Fein, who worked at another School of Rock in the area, decided he wanted to start his own business, and he liked the downtown Plainfield location’s appeal.

“I grew up in the area, and I really liked what they’ve done to Downtown Plainfield,” said Fein.

Fein said he knew that he wanted to locate his School of Rock on Lockport Street where he thought the business would be a unique addition to the business landscape.

“It’s on the rise,” he said of the downtown business district, comparing it to Naperville in terms of demographics.

Fein said that the area still retains a small town feel that belies its expansive growth over the years.

The new business has been warmly received by area merchants he said. The business may be having a positive impact on other merchants with parents frequently dropping their kids off for 45 or 90 minutes lessons visiting establishments like restaurants, coffee shops and others while they wait.

“We already have 30 families a week coming in,” he said with plans to grow that number to closer to 150 families patronizing the establishment in the next year.

The school teaches rock fundamentals in guitar, bass, drums, keyboards, and vocals.  For their monthly tuition, students receive a 45 minute private lesson and depending on age and ability they can also participate in longer group rehearsals of 90 minutes or more.  Students perform 2 shows at a rock venue every three months as part of the program, said Fein.

Students study various rock epochs as well with upcoming shows in September focusing on the British Invasion.  Future themes may focus on Pink Floyd’s The Wall concept album or a Ramones-inspired show.

A 2003 movie starring Jack Black took its name from the string of schools, not the other way around said Fein, dispelling a common misconception.  Fein said that the idea for a performance-based music program for kids came from the school first.  The company was founded in 1998.

“The movie is based on us,” said Fein who noted that Black studied under the school’s founder for the role.

The school offers lessons for kids ages 7-18 with adult lessons available as well.  In the fall, a Little Wings program, named after the Jimi Hendrix song, will be offered for 3-5 year olds.

More information about the Plainfield School of Rock can be found on their website, plainfield.schoolofrock.com or by calling 815-246-3400.

Do you have a news tip about Plainfield or Shorewood? Contact Brock Stein at bralst1@gmail.com, or on Twitter @brockastein.