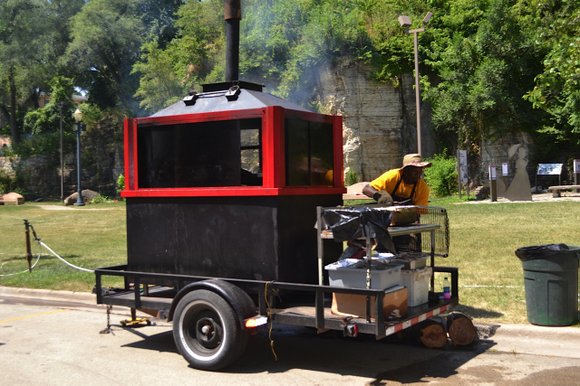 A cook from S&S Barbecue prepares their signature barbecue for the Blues Bash. By Alex Ortiz

When last year’s Black Pride Parade didn’t happen, R. Dale Evans knew he had to do something. So instead of just attempting to revive one event, he ended up reviving two.

“I was really stunned last year when the parade was canceled. As a result, we (asked) ‘what can we do to try and help support that event and to continue the strong, rich tradition of African-American heritage here in Joliet?’ ” Evans said

Evans, Joliet City Councilman Terry Morris and the other sponsors and organizers got to work putting together the first Barbecue Rhythm and Blues Bash in two years. The event was held this past weekend at Billie Limacher Bicentennial Park and presented by the Unity Community Development Corporation. Unity CDC received 50 percent of the proceeds while 20 percent went to the Joliet Township High School Brother to Brother After-School Program, another 20 percent went to the Housing Authority of Joliet’s Family Self-Sufficiency Program and the final 10 percent to promotions. Unity CDC will use its proceeds to help finance this year’s Black Pride Parade.

One of the signature aspects of the event was the music. The Big Dog Mercer Band highlighted the live performances, while Shawn MacDonald and D.J. Eliot Range provided Blues classics. Attendees were also treated to food from sponsors such as S&S Barbeque and Jody’s Chicago Style Hot Dogs. Other assorted sponsors included St. Joseph Academy, Catholic Charities Diocese of Joliet, Organo Gold, Legal Shield and others.

One of the others included the Evans Williams Law Group whose managing attorney at law, Cathe R. Evans Williams, was in attendance because of her commitment to bettering her hometown.

“I think anything that’s going to assist Joliet to become a better place, I want to be a part of it,” she said. “I’m from here, so I like to hear success stories. I don’t always want to hear the bad stuff.”

Williams’ law group reaches out to everyone in Joliet in an array of different legal areas, especially targeting those whose access to legal help has historically been restricted in some way. She also has a half-hour radio show on WYCA 102.3FM at 10:30 a.m. every Tuesday called “Attorneys That Care” where she provides free legal advice.

Such community engagements are common in Williams’ family. Her nephew, David Evans, grandson of the David Evans who founded Unity CDC, attended the event in hopes of growing awareness of an organization he and partner Joshua Herron are starting. The organization, called “Don’t Shoot,” will be geared toward African-American youth to help end violence in Joliet.

“We want to do something positive and bring our community back together,” Evans said.

The number of sponsors and great causes coming together may be evidence that this revival of the Bash will not just be a one-time thing. Many people from different backgrounds, professions and organizations worked together to ensure the success of the Bash and consequently, the Black Pride Parade. R. Dale Evans was most certainly appreciative of the support as he was seemingly never at rest and taking time to speak with everyone in attendance. Of course if it were up to him, this event will continue to be sustained for years to come.

His goal moving forward is to “restart the tradition of the Barbecue Blues Bash and the African-American festival and parade.”