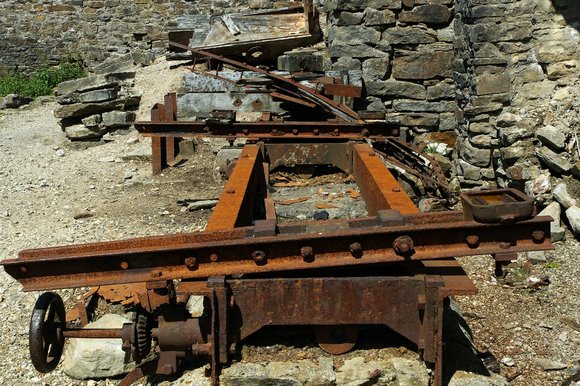 Unsafe levels of lead contaminate soil in hundreds of neighborhoods around the U.S. where lead smelting facilities operated between the 1930s and 1960s. Children under the age of six are especially vulnerable to lead poisoning, which can severely affect mental and physical development. Pictured: Rusty remains at an old lead smelting mill. Simon Bowen

Dear EarthTalk: What are “ghost factories?”

In April 2012, USA TODAY published a series entitled “Ghost Factories,” a report on an investigation into lead contaminated soil in hundreds of neighborhoods around the U.S. where lead factories once operated. The investigation addressed the lack of action taken by the U.S. Environmental Protection Agency (EPA) to test and clean up these sites despite having been warned in 2001 about the dangerous levels of lead contamination around the areas of these old facilities.

The factories, which used a process called smelting to melt down lead, were in operation from the 1930s until the 1960s when they began to shut down. While the factories themselves may now be gone, their toxic legacy remains, as they have left behind significant amounts of poisonous lead particles in surrounding soils. The lead particles are particularly dangerous for children who live and play in these areas. “Lead poisoning occurs when lead builds up in the body, often over a period of months or years,” reports the Mayo Clinic, adding that even small amounts of lead can cause serious health problems. “Children under the age of 6 are especially vulnerable to lead poisoning, which can severely affect mental and physical development [and] at very high levels...can be fatal.”

Environmental scientist William Eckel warned government officials of the dangers of old lead factories in his research article “Discovering Unrecognized Lead-Smelting Sites by Historical Methods,” which was published in the American Journal of Public Health in April of 2001. Eckel used EPA databases along with lead industry directories to compile a list of more than 400 possible factory sites around the country that may have been unknown or forgotten over time. In an effort to create some urgency for federal regulators, he paid to have the soil around eight of the sites tested and all but one exceeded the EPA’s hazard level for residential areas. More recent soil tests done by USA TODAY revealed that all 21 areas that were examined in 13 states had potentially dangerous enough lead levels that children should not be playing in that dirt. This meant, of course, that cleanups of these sites had not been done.

In response to Eckel’s findings and the USA TODAY series, EPA has initiated work with states to survey the majority of the sites on the 2001 list, although records for many of the affected areas are incomplete. “I am convinced we have addressed the highest-risk sites,” reports Elizabeth Southerland, director of assessment and remediation for the EPA’s Superfund program. She says her agency is open to reassessing sites that may need another look thanks to more recent information uncovered by USA TODAY.

Unfortunately, ongoing federal budget woes mean that resources are severely limited. In fact, the EPA lacks funds to complete even previously scheduled Superfund remediation projects. In the meantime, individual homeowners can determine whether or not they live near a former lead smelter and can apply pressure to local authorities accordingly. USA TODAY has posted a free online map to help people figure out exactly where the danger zones might be.