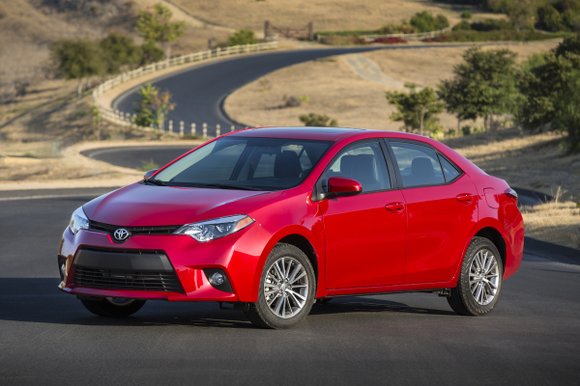 If the Camry is Toyota’s bread then the Corolla is certainly the company’s butter.

What’s more, it was the Corolla that cracked the American car market wide open for Toyota. The car was the right prescription at the right time. It was small, it was fuel-efficient and most importantly it was reliable.

If not for the Corolla becoming an icon of small, gas sipping, sturdy cars, it is doubtful that Toyota would have become the automotive juggernaut that it is today.

But a yellow caution light has come on and with the 2014 Toyota Corolla the company hopes to snuff it out before it gets serious. On the one hand, the Corolla is Toyota’s second bestselling nameplate with 300,000 annual sales. But on the downside the average age of a Corolla buyer is about 53-yers-old.

That number needs to be lowered or it will go higher; that’s one reason why the advertising and marketing campaign for the new Corolla will lean heavily on digital and social media. Still, the automaker should take pains as not to tick-off current owners with a new Corolla that doesn’t appeal to them.

That’s the probable reason why the 11th generation of the 47-year-old Corolla is bigger a lot bigger. That should appeal to older buyers. Toyota’s new compact can carry four adults comfortably.

The wheelbase was lengthened by 3.9 inches; the overall car was 3.9 inches longer; it was 0.6 of an inch wider and 0.6 of an inch lower. The key was moving the hip point of the rear seats back 3 inches. That created a back seat area that was as spacious as some midsized sedans.

Does that extra space make the 2014 Corolla a perfect car? It sure didn’t. The steering could have been a little tighter, a colleague noted that the brake pedal was a little spongy and the car could have used a bit more low-end torque for better acceleration from 65 mph.

That’s the problem when automotive companies and the cars they make become icons. There is a danger of always expecting more despite the facts. And the fact is that the 2014 Toyota Corolla is a compact car that starts at less than $20K no matter what model you get. And at that price range, you’re not going to get sports car performance.

Trim lines begin with the $16,800 L, there’s the $18,300 LE, and the LE Eco starts at $18,700 and the 2014 Toyota Corolla S starts at $19,000. Buyers have the option of three transmissions. There is a four-speed automatic; Toyota doesn’t expect to sell many Corollas equipped with it. There’s a six-speed manual gear box but the real effort has gone into the new continuously variable transmission (CVT).

It has been tuned to simulate gearshifts; the Corolla S equipped with a CVT comes with paddle shifters. This transmission was so quiet it made you forget that it was a CVT. Gone was the unnerving whine of CVT transmissions.

The gearboxes can be paired with a 1.8-liter four-cylinder engine that is a carryover from the last model, though it has been enhanced. It made 132 horsepower and 128 pound-feet of torque.