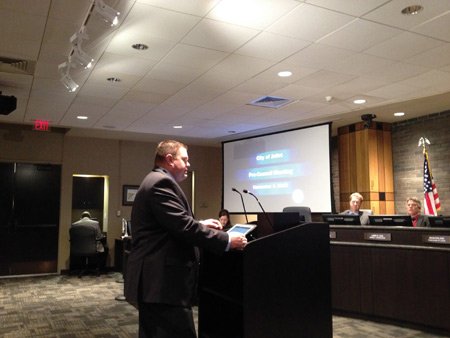 Tim Hunter, union president for Joliet Firefighters, lambasted Councilwoman Jan Quillman at Monday's pre-council meeting for an incident that occurred at her home on Aug. 25. Photo by Rex Robinson

More than 40 Joliet firefighters showed up at city hall for Monday’s pre-council meeting where their union president expressed disappointment with Councilwoman Jan Quillman about an incident that happened at her home in late August.

Paramedics were called to Quillman’s home on Aug. 25 to treat her 92-year-old mother-in-law who was bleeding profusely from her ankle. As paramedics attempted to treat her and get her into the ambulance, Quillman, who is a nurse, tried to assist and, according to reports, said she was pushed out of the way by paramedics and that one of them attempted to grab her breast. No charges were ever filed against any of the firefighters after the alleged incident.

Tim Hunter, president of Firefighters Local 44, expressed disappointment in how Quillman handled the situation, and more importantly statements she made to the media after the incident. Joliet firefighters, he said, “deserve respect, honor and praise for what they do.

“What they don’t deserve is to be unjustly accused of what they stand against, and over the course of numerous media articles and statements within those articles, that is exactly what happened here,” Hunter added.

“We could have taken the low road and fired back personally, but we chose not to,” Hunter said.

Quillman, he added, was asked to “make the situation right,” by making a public statement about how Joliet firefighters are “an honest group of passionate servants to the community. But she declined,” Hunters said.

“Moving forward, on behalf of the firefighters and their families, even though we are disappointed, we would like to forgive Councilman Quillman for her actions that she took against us directly.”

Hunter said his larger concern is the lack of support for the firefighters. This, he added, can impact the safety of the public.

“The community’s best interest should be what drives this council,” Hunter said, “not personal feelings for a single organization. We all serve the citizens in various capacities and should put the community first as the firefighters do every day.”

Georgene Williams, a nurse and a supporter of Quillman, said the firefighters should not have pushed Quillman out of the way on the night of the incident. She added that they were acting “petty” by bringing the whole issue up again at a city council meeting.

Quillman did not respond to Hunter after he made his statement. She also declined to comment after the meeting.