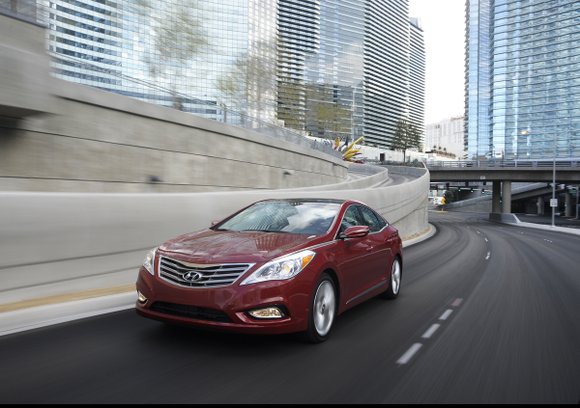 The 2013 Hyundai Azera is one of those ‘Oh, my goodness’ kind of cars.

After a week-long test drive the only thing to quibble about on the midsize sedan was its headrests. Other than moving up and down, they were not adjustable. For most drivers, they have to be used because they can’t be adjusted out of the way. But that was the only downside to this premium sedan.

The front-wheel-drive Azera was powered by a direct injected 3.3-liter normally aspirated V6. It made 293 horsepower and 255 pound-feet of torque. The engine was mated to a six-speed automatic transmission.

This powertrain had subtle oomph, it was quiet and it moved the 3,600 lb. Azera with ease. The car had an EPA rating of 20 mpg on the city and 29 mpg on the highway. The MacPherson strut front suspension and the multilink set up of the rear suspension were tuned so that it felt like an air suspension.

The car sort of glided over the road. And it handled some really rough patches of pavement and deep depressions (potholes) without a glitch.

In the case of the Azera, Hyundai’s fluidic sculpture design is more understated than on its smaller models. Still, the car was long, low and relatively light on its tread for a sedan that approached full-size. The beltline allowed for a long, sleek roofline accented by a port window and wraparound LED taillights. The side profile included flowing lines in the rear quarter panel. The car’s face was masculine with a powerful, winged chrome grille and headlamps that seem integrated into that grille.

The car was nimble with a turning radius of 36.5 feet and it took 2.9 turns of the wheel from lock to lock. For true lovers of driving, the 2013 Azera’s power assisted rack and pinion steering was refreshing. There was a connectedness between car and road that oft times get lost with electric power steering systems.

But what made the Azera feel a notch above the average sedan was its interior. The passenger cabin was spacious and appointed with quality materials from the leather seating surfaces to the faux carbon fiber trim on the dash board and doors.

The test vehicle had a panoramic sun roof. There was a power sun shade on the rear window and manual sun shades for the rear side windows. The rear seats felt like they were sculpted to fit the body. There was plenty of head room and leg room was cavernous. Oh, those rear seats were heated too.

In the front, the Azera had a center stack, the only piece of equipment that was a tad behind the times as the industry is moving to horizontal control panels.

Two large analogue gauges, the odometer and the speedometer, were in front of the driver. They were separated by a TFT screen rift with vehicle usage settings that were too many to go into here.

Some of that equipment was in the technology package. Somewhat of a surprise was that it included a driver seat cushion extension. Up until now, that’s a feature found in much more expensive cars.

And that get us back to the ‘Oh my goodness” characteristic of the 2013 Hyundai Azera. The base price was $32,250. Even after adding the technology option package and freight charges the car cost $37,225.