Minorities could benefit from new airport 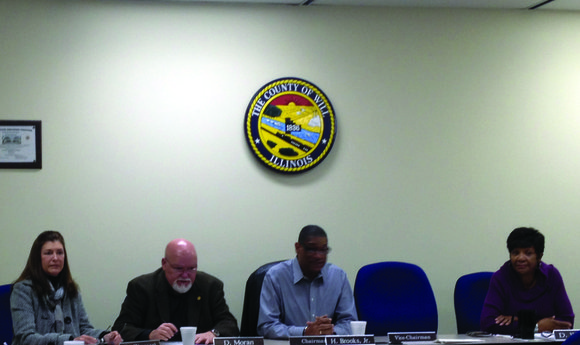 The new ad-hoc airport committee for the Will County board held its first meeting Nov. 7. Pictured (from left) at the meeting are board members Diane Zigrossi (D-Crest Hill), the Don Moran (D-Romeoville), the committee’s chairman, Speaker Her Brooks (D-Joliet) and Denise Winfrey (D-Joliet). Photo by Rex Robinson

The proposed third airport in southeastern Will County will impact everyone – from those who own property in its footprint to small business owners and anyone looking for jobs from throughout the region, including those in and around Joliet.

Will County board members want to make sure that as the project moves forward they are kept informed and have a say in the major decisions regarding the airport and how those decisions will impact – not only the county – but their constituents.

The needs can differ drastically depending on what area a particular county board member represents.

County board member Denise Winfrey (D-Joliet) said she sees the airport as a project that could bring many opportunities for minority-owned businesses as well those who are out of work from in and around Joliet. While the location of the airport is out in southeastern Will County, she said, it’s not that far away from Joliet for someone looking for a job.

“I don’t see that as an issue,” Winfrey told The Times Weekly. “When I look at the project as a whole, I look at the welfare of the entire county.”

The project, she added, could benefit “all people of color,” from the construction phase in terms of opportunities for minority-owned contracting businesses and food truck vendors to various new business opportunities that will arise once the airport is built. There could even be internship opportunities for students who want to learn about aviation or airplane mechanics, Winfrey said.

She emphasized the importance of everyone working together on the committee toward the same goal of making the airport a viable project for the entire county.

However, like any committee of the Will County Board, all county board members are welcome to attend the meetings and give input to the committee. County board member Judy Ogalla (R-Monee), attended the first meeting of the committee and said she would like to make sure property owners around the airport, as well as all elected officials from surrounding villages and townships impacted by construction of the airport also have input in the project going forward.

Moran met recently with Illinois Department of Transportation Secretary Ann Schneider to let her know of the committee’s formation. Moustis said he wants Moran to be the county’s first point of contact for Schneider and other IDOT staff members.

The proposed airport has been in the works for more than a decade and was reignited earlier this summer when Illinois Gov. Pat Quinn signed a law giving the Illinois Department of Transportation the power to build the South Suburban Airport in Peotone through a public-private partnership.