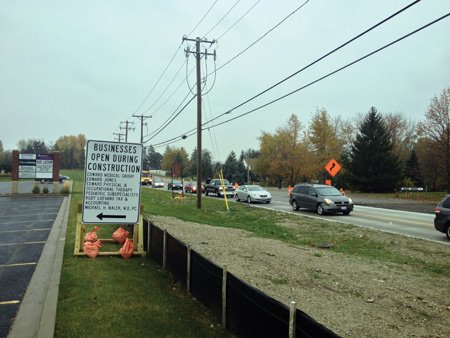 A sign along Weber Road where a major reconstruction project is underway alerts motorists that the businesses remain open while the work progresses. Photo by Rex Robinson

A major reconstruction project on a section of Weber Road that runs between Crest Hill and Romeoville is expected to take six to nine months longer than expected to complete.

The $12.9 million project includes the widening of Weber Road from four to six lanes, installing new curbs and gutter, new storm sewers, left turn lanes and traffic lighting. The project was initially slated for completion at the end of the year, but due to problem with relocating utilities the widening of Weber Road is now expected to be completed in the spring of 2014, while the Weber and Renwick intersection portion of the project will not be done until the fall of 2014, according to Jeff Ronaldson, assistant engineer for the Will County Department of Highways.

That is not welcomed news for business owners along Weber Road.

Ebony Mills, owner of the Shear Perfection salon within a strip mall along Weber Road in Crest Hill, said she is disappointed the project is taking so long, adding that she doesn’t think the county has enough workers on the project.

“It’s affected our walk-in business,” Mills said. “People don’t want to stop and then have to get back in the line of traffic.”

Mills said while she was glad to see signs get put up along Weber Road reminding motorists that businesses were open during construction, she would appreciate city or county officials giving updates on the project to the business owners.

“We’re losing a lot of customers,” Oh said. “Sometimes there are less than 10 customers a day.”

Richard Reynolds, a resident of the Grandhaven community in Romeoville, said with the construction traffic at the intersection of Weber and Renwick at 5 p.m. is a nightmare.

Steve Gulden, village manager for Romeoville, said while he understands the frustrations of the business owners it will be a major improvement when it’s completed. The traffic flow, he said, will be greatly improved.

Initially, the plan was to reduce the number of lanes from six to four on a portion of Weber from Gaskin Drive north to just short of the entrance to the Wal-Mart, but Meier is considering building a new grocery store in that vicinity and, according to Gulden, has agreed to contribute $2 million so that the entire roadway is expanded to six lanes throughout the estimated two-mile stretch.

Ronaldson said that project is considered separate from the larger $10 million project going on along Weber, which includes the upgrades to the intersection at Renwick.

Haven Circle will be able to handle the current vehicle capacity as well as projected traffic increases that are anticipated for this area,” Ronaldson said.