Will County union workers take to the streets 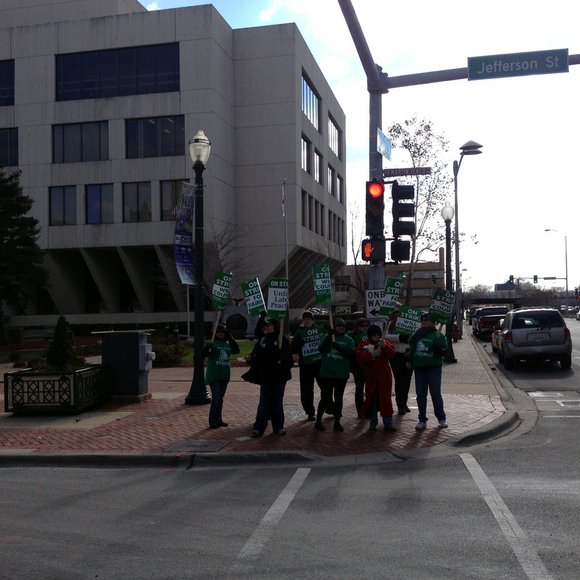 Striking union employees march on the corner of Jefferson and Ottawa streets in front of the Will County Courthouse on Monday. Photo by Rex Robinson

A majority of Will County union employees swapped their time cards for picket signs Monday and marched in solidarity in front of all of the county’s buildings in downtown Joliet and elsewhere.

Many motorists, including truckers, honked their horns to show support as they drove by, while union workers shouted: “What do we want? A fair contract! When do we want it? Now!” and “Two, four, six, eight, the County should negotiate!”

Monday was the first day of the strike after negotiations broke down late last week between AFSCME Local 1028 and Will County Executive Larry Walsh and the county board.

“Most of the (circuit court) clerks out here today make less than $25,000 a year,” said Nicole Lane, who has worked in the records department of the circuit court for the past six years. She said she will strike for as long as it takes to get a fair contract.

Upper management has made too much money for too long, Lane said. “We supported them for their elections. We did the work,” she added. “We are loyal employees. Most of us out here on the line have been here for six years or more. We’ve given our service. It’s time for them to give back and be loyal to the employees.”

Early Monday morning, Walsh released a statement assuring residents that Will County government “was open for business and ready to serve their needs despite a strike by the County’s union workforce…” Walsh said the county has been working for more than 15 months to avert a work stoppage by the union, but could not reach an agreement.

“I have said throughout these negotiations that a strike is not good for anyone; no one wins with a strike,” Walsh said. “I was very disappointed to learn that AFSCME employees who claimed they too wanted to avoid a strike wore red stickers throughout all of our recent negotiation sessions that proudly proclaimed their readiness to strike. I had hoped they would have spent their time and energy on bringing a more realistic proposal on health care and wages to the bargaining table.”

Anders Lindall, spokesman for the union, said 96 percent of union workers were striking Monday and the strike did appear to have an impact on county services.

Pam McGuire, Will County Circuit Court Clerk, said due to the strike only the main office of the circuit clerk at 14 W. Jefferson St., in Joliet, will be open for conducting business transactions. Per Chief Judge Richard Schoenstedt, McGuire said, all courtrooms would remain operational and staff will be available based upon the priorities set forth by the chief judge.

“Phone calls will not be answered and email responses may be delayed during this time” McGuire said, urging people to use the website (www.willcourtyciruitcourt.com) to obtain court case information or obtain court forms.