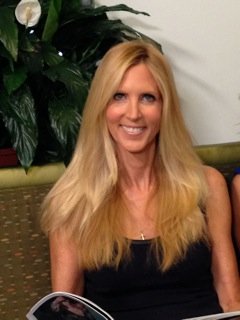 Valerie Plame was not an undercover agent and her husband, Joe Wilson, was a boob.

Waterboarding as practiced in Guantanamo was never considered a “war crime.” MSNBC commentators who said so were apparently reading “Little Women” rather than military histories as children.

Liberals tell amazing lies about guns and everything else.

AC: That was just to rhyme! (But thank you!) I don’t think I have an unkind word for any of them. Oh wait, except Muslims. I’ve been cross with them since 9/11 2001. I can't remember why but it was something bad.

KW: What do you think about the Obamacare roll-out?

AC: The roll-out has gone much better than I ever dreamed it would. Six people in America signed up on day one? Beat that, free market capitalism!

KW: What do you think of program itself? Have you read the whole law?

AC: I’ve read more of it than Nancy Pelosi has. It’s a disaster. Harvard graduates just cannot shake the idea that they know better than everyone else what’s best for us and that they’re capable of running a mammoth, unwieldy government program providing each one of us with the precise health insurance we need, at a good price, with no waste or fraud. Trust them, they worked it all out on paper their junior year.

KW: Do you think it’s important that the President promised, “If you like your health insurance, you can keep your insurance,” or is it no different from President Bush saying, “Read my lips: no new taxes,” and then reneging on that guarantee after getting elected.

AC: Big difference! Bush was making a promise about future behavior, Obama knew what he was saying was a lie when he said it, but he had to say it or the law wouldn’t have passed, even on a strict party-line vote, without both houses of Congress ever voting on the same bill. The Obamacare bill was written. The mandates for all insurance to cover whatever HHS Secretary/gender-feminist Kathleen Sebelius considered important was in that bill. Other insurance plans were made illegal in the bill Obama was touting at the very moment he was claiming it would allow you to keep insurance you liked. But he had to lie in order to get the bill passed. By contrast, Bush made a promise about his future behavior and then broke it. For that to be the same as what Obama did, Bush would have had to campaigned for a specific bill that raised taxes by assuring Americans the bill would not raise taxes.

KW: I told my readers I’d be interviewing again, and a lot of them sent in questions.

KW: Documentary filmmaker Kevin Williams asks: Why do you think so many liberals, even outside of New York City and Los Angeles are so unaware of their own bias, if not prejudice, against conservatives and in particular female and black conservatives?