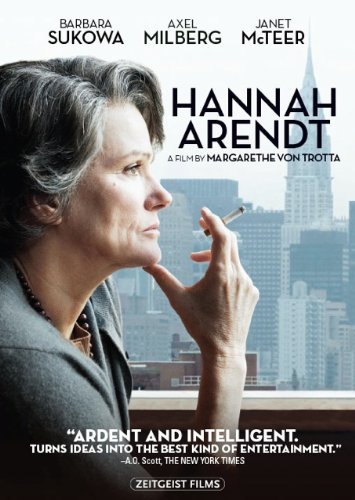 I’m not sure whether there’s a term for the Jewish equivalent of an Uncle Tom but, if there is, it would probably be applicable to Hannah Arendt (Barbara Sukowa). Born in Germany in 1906, Hannah studied philosophy at the University of Marburg, where she became both the protégé and the mistress of Professor Martin Heiddegger (Klaus Pohl), “the greatest love of her life,” a Nazi who went to his grave without ever apologizing for his support of Hitler.

In response to the rise of anti-Semitism across Deutschland, Arendt fled first to France in search of sanctuary, and later escaped to the United States with her mother and husband, Heinrich (Axel Milberg), on illegal visas secured from an American diplomat. She became a citizen in 1950 and subsequently made history as the first female lecturer at Princeton University.

However, as Shakespeare suggested in Julius Caesar, “The evil that men do lives after them: The good is oft interred in their bones.” Such is apparently the case with women, too, as Hannah appears fated to be forever remembered for a series of articles she wrote for the New Yorker magazine while covering the trial of Adolf Eichmann in Jerusalem.

Like one of those weirdoes who falls for an inmate, she inexplicably sided with Eichmann, the architect of the Holocaust, buying hook, line and sinker his “I only followed orders” defense. Her coverage created a huge uproar as soon as it started hitting the news stands.

This is understandable because instead of calling Eichmann a monster, she merely referred to him as “a clown, a foolish little servant of Hitler who didn’t have a mind of his own.” The blowback from this “banality of evil” theory was deservedly severe since Hannah simultaneously had the temerity to indict Jewish leaders for supposedly cooperating with the Nazis.

A fascinating character study of an arrogant, cold-hearted, self-hating Jew who had the nerve to blame 6,000,000 of her own people for their extermination in concentration camps.

In English, French, Hebrew, Latin and German with subtitles

To see a trailer for Hannah Arendt, visit: http://www.youtube.com/watch?v=iIUbQR9b1P8&feature=youtu.be