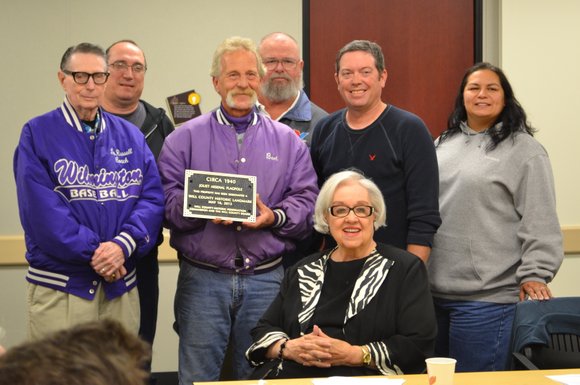 Will County’s Historic Preservation Commission honored the City of Wilmington and Bert Niehls for the recent landmark designation of the Joliet Arsenal flagpole now part of the Island City Memorial in Wilmington.

The Preservation Commission presented them with a bronze plaque on Nov. 6 to commemorate the historic significance of the flagpole. Niehls had been instrumental in efforts to have the flagpole recognized.

The Island City Memorial is now home to the flagpole, which was relocated from the former Joliet Arsenal property to its current location in about 2003. The Joliet Army Ammunition Plant was a major employer in the Will County area, and its operations played a significant role in ammunition productions for the U.S. Army.

For more information about Will County’s historic landmark program, go to http://www.willcountylanduse.com/historic-preservation. The Historic Preservation Commission is spearheaded by the Land Use Department led by Curt Paddock and is under the County Executive’s office.