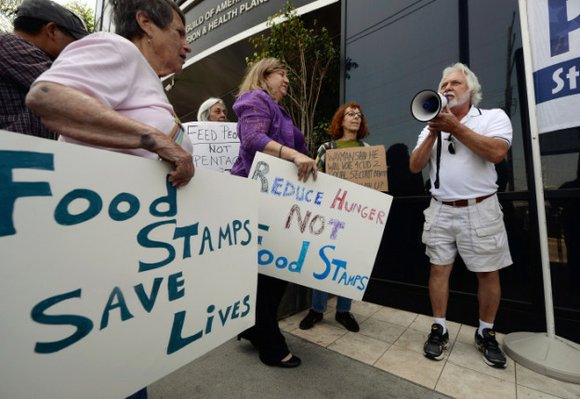 Just as the holiday season begins, when the thoughts and actions of some focus on compassion for others, we could be about to witness the government’s forcing the poor to go hungry – the product of political horse-trading in Washington that has erased a critical portion of the already-meager subsidy the federal food stamp program provides the more than 47 million Americans who receive it.

And it’s a virtual certainty more draconian cuts in the program will be made – cuts that increase the threat millions of men, women and children will in years to come endure not only hunger but also a host of health and health-related problems that the combination of hunger and poverty will produce or intensify.

This is the quagmire a nation with a huge surplus of food must find its way out of.

As usual when it comes to federal aid to poor and working-poor Americans, the issue isn’t really the actual availability of funds for aid. The issue is politics – and the deepening showdown in the nation between compassion and callousness.

But it’s also a matter of the House Republicans majority’s refusal to recognize that the food stamp program is a bulwark against the social and economic catastrophe widespread hunger in America would produce.

On November 1, Congress allowed to expire without replacement a temporary boost in the food-stamp program budget provided by funds from the 2009 economic stimulus package. The expiration reduced the monthly allotment food stamp recipients get by $11 for a one-person household to $36 monthly for a family of four. The increase had been the government’s response to the need of the program – its formal name is the Supplemental Nutrition Assistance program (SNAP) – to cope with the sharp rise in the numbers of Americans needing aid to buy food. That increase was driven overwhelmingly by the Great Recession’s erasing more than 8 million jobs from the nation’s workplace. As joblessness grew, so did the numbers of people seeking food stamps.

As a result, according to the Congressional Budget Office, the program’s budget ballooned from $35 billion in 2007 to $80 billion now as its enrollment swelled from 26 million to its current level of one out of every seven Americans.

Earlier this year, a majority of Republicans in the GOP-dominated House of Representatives, chanting their mantra of fiscal responsibility, approved as part of the farm bill Congress is considering a provision that would cut $40 billion from SNAP over 10 years. The SNAP provision in the Democratic-controlled Senate version of the bill differs significantly. It proposes a $4 billion reduction.

The House proposal would deny benefits to 3.8 million people next year and an average of 3 million each succeeding year, according to the Center on Budget Policy and Priorities, a nonpartisan think tank, and usher in a situation of social catastrophe akin to that of some Third-World countries.

But the Senate version looks better only by comparison with its extreme counterpart. The harshness of the regime it would produce can be glimpsed by examining the affect the mandated November 1 cut is already having on food stamp recipients – people who by the program’s very eligibility requirements have very low incomes and no financial resources to withstand even minor emergencies.