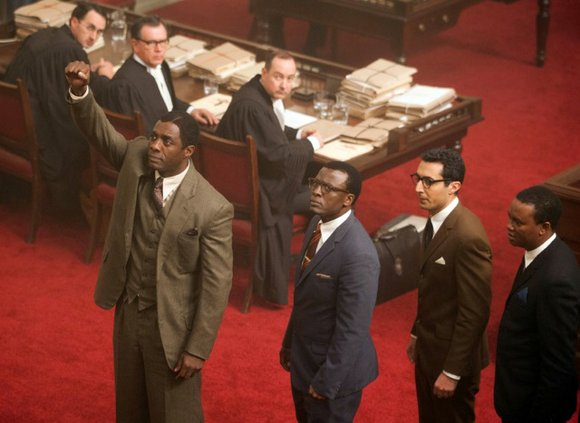 You’d think the life and times of Nelson Mandela, the man who saved South Africa from the evils of apartheid, had already been thoroughly documented. However, that’s not the case. Sure the media covered the interminable prison sentence ended by worldwide economic/political pressure, the inauguration of South Africa’s first Black president and the transfer of power that included forgiveness. But there is so much more to Mandela’s life story, and this revealing bio-film fleshes out those details while definitively establishing the psyche of a man who is best described as an earthly saint.

Based on the legendary freedom fighter’s autobiography, William Nicholson’s insightful screenplay chronicles Mandela’s (Idris Elba) early life. You witness his transformation from playboy lawyer, to a staunch African National Congress activist, to a soldier who picks up arms in the battle against apartheid. You observe his romance with Winnie (Naomie Harris, Skyfall), share their idealism, and you’re horrified and disheartened when their marriage deteriorates.

Directed by Justin Chadwick (The First Grader) and photographed by (Lol Crawley cinematographer, Hyde Park on Hudson) the vivid and colorful footage sets the time and place perfectly. Police brutality scenes are sobering. When Mandela languishes in jail, contemplating freedom, it’s a spiritual phenomenon. Sequences when Nelson returns to his boyhood home in the countryside are gorgeous and inviting. Alex Heffes’ (The Last King of Scotland) musical score swells at all the right moments.

Elba’s virtuosity as an actor is evident in every frame. The accent is consistent and convincing. His ability to age his character from young lothario to elderly statesman, with grace, is amazing. Harris is equally up to the task of portraying all the determination, anger and misguidance that made Winnie, once a well-intentioned militant, become a woman with a broken internal compass.

A lifetime of heroism is expertly condensed into this two-and-half hour, well-paced and inspiring movie that preserves the legacy of an icon. This is a must-see viewing. For the artistry. The performances. The history.