Union negations will not resume until after the holiday 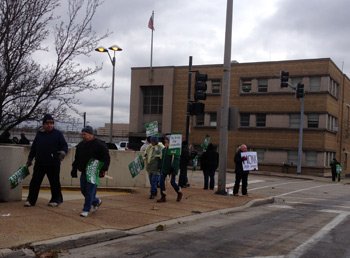 Union workers are seen picketing at the Will County Courthouse. Photo by Rex Robinson

Members of the American Federation of State, County and Municipal Employees Local 1028 will not be meeting with Will County leaders to negotiate again until after next week sometime.

The strike is now into its 10th day. AFSCME Local 1028 leaders proposed resuming negotiations with representatives of county management today and to bargain through the weekend.

However, county leaders declined and told the union that they won’t be able to respond until after the holiday to the proposal AFSCME made Monday.

“Public services are stopped and families are out of work, but county management doesn’t seem to think it’s important to get Will County working again,” AFSCME Local 1028 president Dave Delrose said. “The union is ready to work around the clock, and we expect the same from management.”

Meanwhile, Will County Executive Larry Walsh expressed frustration with the union for not coming prepared to the negotiating table on Monday. More than six hours of negotiations failed to produce a contract or any meaningful movement after more than a week of work stoppage by county union workers, according to Walsh.

“I am truly disappointed that the union was not prepared to make a formal counter proposal when we began today,” Walsh said. “After a week of picketing county facilities, and over a week since the last negotiations session broke off, the Union was not able to give us a meaningful counter offer and move us toward a resolution.”

Delrose said county employees are “more determined than ever. We want to work and serve the people, but we’ve got to have a fair settlement first,” he added.