Three being treated at area hospital after taking flesh-eating drug 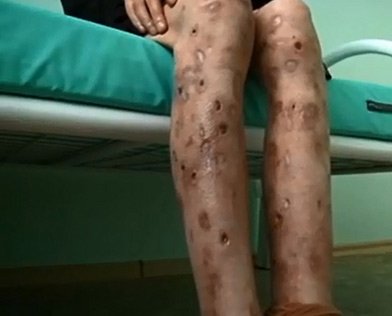 This photo was the least graphic to be found on Google images of all the photos showing the effects this horrible drug can have on the skin.

A doctor from Presence St. Joseph Medical Center in Joliet is treating three people - a woman and two men - who have reported taking the flesh-eating drug known as Krokodil (Russian for crocodile) a low-grade heroin substitute.

Dr. Abhin Singla said while walking the intensive care unit at the hospital Monday morning a nurse approached him and told him the hospital had just admitted a 22-year-old female IV drug user and he got closer to her room, he could smell decaying dead flesh. He walked in the room and examined her, and knew he had a case of someone who had injected krokodil.

"I saw the green scaly skin and raw, dead tissue on 70 percent of her legs," Singla said. Nurses and infectious disease medical personnel on staff at the hospital, thus far, have been able to save both her legs.

Later that day two other women came to the hospital and reported taking the drug, but became paranoid they would be arrested and left, according to Singla. Two other men, 22 and 32, also came into the hospital with symptoms of using the drug and are still being treated, Singla said. 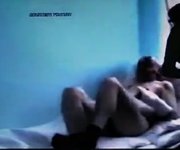 Just days ago, cases of the flesh-eating drug krokodil were reported in Arizona and now it has hit our area.

Singla said none of the victims knew what they were taking and that their dealers (one from the west side of Chicago and another one who is local) told the victims they were getting heroin, when in fact they were being given krokodil.

The first woman that Singla examined has been taking the drug for about a month, he said. She is sedated now and Singla said is waiting to talk to her further so law enforcement officials can find out exactly who supplied her with the drug, also known as desomorphone. He said he also is working with Drug Enforcement Administration officials.

Charles Pelkie, spokesman for Will County State's Attorney James Glasgow, said from a law enforcement perspective, nothing has come up about this drug.

"We have no criminal cases on this to prosecute at this time," Pelkie said.

A former addictionologist for former Will County State's Attorney Jeff Tomscak, Singla, a doctor of internal medicine and an addiction specialist, said the drug has been around since the '30s and was used initially used a pain killer in Russia after being patented in 1932. Taken in pill form, the drug does not cause the decaying skin problems. In Russia, addicts later found they could mix over the counter pain killers with gasoline, pain thinner and red phosphorous and come up with a homemade version of desomorphone.

"If you want to die, this is the way to do it," he said. "You will literally rot from the inside out. In Russia, the average life expectancy is two years."

Singla's fear is he will see more of these cases. "My biggest fear is that we're at the tip of the iceberg," Singla said.

It's one thing, Singla added, to treat someone with an addiction and it's another to deal with a drug that is maiming people.

Singla said some cases can be so advanced that muscles, tendons and bones may be visible.

According to Singla, the drug is much cheaper than heroin, often as little as 10 percent of the price. It can be taken orally or via injection, although the injection form is the preferred choice of many users in that it produces more of the “high.” After injection, the other chemicals began to work on the inside of the body, destroying tissues and blood vessels with abandon, ultimately causing the name giving green scaly appearance to the skin. This dead skin can lead to life threatening infections, some requiring strong antibiotics and surgery, often amputation and also death. Russian doctors have reported death can occur 12-18 months after starting use of the drug.

He warned of increased use of krokodil stating, “Will County’s already burgeoning heroin epidemic may have created a tolerance level to the point where users are now looking for cheaper and better highs.”