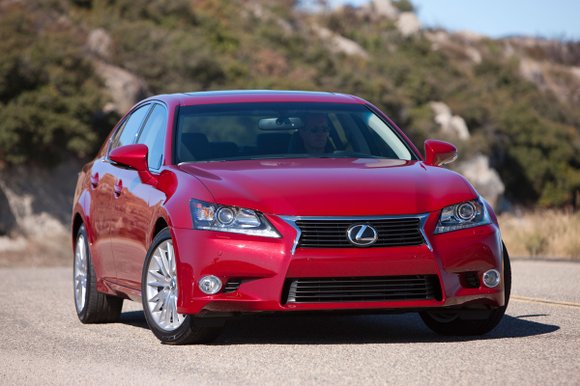 Lexus’ ES sedan was the Japanese luxury brand’s most conservatively styled car. Thus, it benefits the most from the brands shift to spiffier and more familial styling. In fact, a couple of observers actually thought it was the company’s vaunted flagship, the LS 430.

The 2013 Lexus ES 350 is slick, sleek and looks like it belongs with some of the best luxury sedans on the globe.

For the sixth generation, the ES 350’s wheelbase has been lengthened to 111 inches and this created an interior that was spacious, especially in the rear passenger compartment where most mid-size sedans can be rather cramped.

There was plenty of legroom and hip room was ample. About the only downside of the rear passenger area was that the door opening could be a head bumper. It lowered as the roof, thus the door opening, sloped down to meet the C pillar. Still, the 2013 Lexus ES 350 could accommodate four adults in style and in comfort.

The front passenger area was dominated by Lexus’ new horizontal dash and analogue instrument panel. The clean lines made the car look wider. But Lexus should upgrade the materials; the silverfish polymer surface on the control template makes the setup look inexpensive when it certainly is not. And the tactile soft touch points on the dash should have been softer than they were.

The car was powered by a 3.5-liter V6 that made 268 horsepower and 248 pound-feet of torque. It was mated to a six speed automatic transmission. The ES 350 had an EPA fuel efficiency rating of 21 mpg in the city and 31 mpg on the highway with 24 mpg combined.

Power was plentiful for everyday driving. Passing was quick, handling was sure and the suspension was adaptable.

A new reverse coil spring front suspension enhanced straight-line stability. The steering ratio had been reduced for quicker response to driver input and the body rigidity had been increased for a smoother ride.

The test car had three ride settings: normal blended fuel efficiency and performance. But when set in sport, more torque was required to steer the car and powertrain responsiveness increased.

Most of the seat time during the week-long test drive was spent in eco mode. It changed throttle mapping and climate control output to favor fuel efficiency.

The Lexus ES 350 was an easy car to drive. At 3,500 lbs., it didn’t feel like a big cumbersome sedan. It had enough power to be spry on city streets as well as expressways and it was quiet enough to keep the noise of traffic and the city outside of the car.

With so many more distractions, blind spot alerts are becoming more prominent in the auto industry and more appreciated by drivers. The system on the ES 350 was just one of its safety components that have become creature comforts. The car was chock full of them.

There was a backup camera, Lexus’ Entune suite of internet apps that connects through a smartphone, a navigation system, voice command, satellite radio and intuitive parking assist.