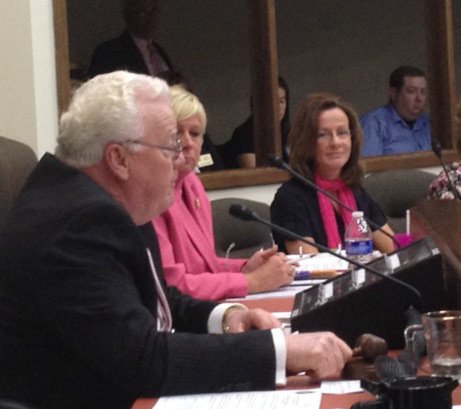 For more than a half hour, democrats laid out reasons why they think the increase is needed to pay for vital county services as well as much needed capital projects, while republicans decried how with economy continues to struggle and the last thing the board should be doing is raising people’s taxes.

More than once, Walsh found himself slamming the gavel to keep board members from talking over each other as they debated what could amount to about a $10 property tax increase annually for the owner of a $200,000 home. This increase only includes the county’s portion of the tax bill, and does not include any other increases by local school districts and other taxing bodies.

The total levy, as amended and approved only by Walsh’s vote, includes up to a $900,000 increase its tax levy, which is the amount of property taxes a taxing body uses toward its budget. In the end, the vote was 12-12-1, with county board member Tom Weigel (R-New Lenox) passing, and Walsh, siding with democrats to cast the deciding vote to adopt the amended levy.

Republicans on the board stood firm and would not budge on any increase, no matter what it amounted to. Republican caucus chairman and board member James Moustis (R-Frankfort) said even if the increase amounted to only $1 a year for property owner he would have voted against it.

Will County board debate over tax levy

Finance committee chairman and county board member Steve Wilhelmi (D-Joliet) at first made a motion to table adoption of the levy to give the board more time to discuss it, but the board voted 13-12 against that move. It was then that the debate on the floor got underway.

Wilhelmi, county board Speaker Herb Brooks (D-Joliet) and other democratic leaders on the board argued that the increase is necessary to fund capital improvements, like the purchase of the First Midwest Bank building which the county is considering eventually demolishing to make way for a new court house.

Paul Rafac, the county’s finance director, said the $900,000 would be covered by proposed new construction coming into Will County, but Moustis argued the tax increase would still be coming out of the pockets of all the county’s property owners.

“This is an additional tax for everyone, across the board,” Moustis said.

Board member Reed Bible (D-Plainfield) said the $10 annual increase amounts to a “meal at McDonalds.”

Moustis, however, said the board should not be dismissive about raising property taxes. Government, he added, is not “entitled to people’s money.”

Board member Denise Winfrey (D-Joliet), chairwoman of the county board’s capital improvement committee, disagreed that the increase was in any way frivolous spending, and said the money is clearly needed for necessary capital improvement projects. “It is a reasonable approach,” Winfrey said.