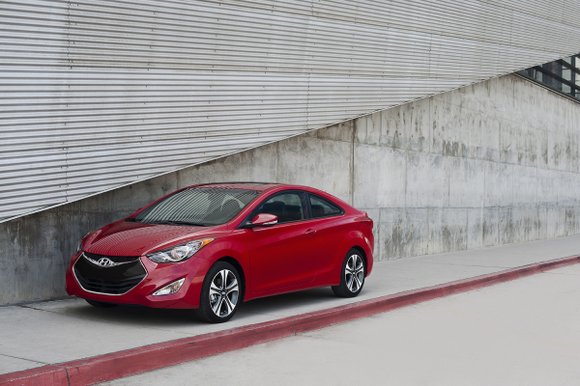 The Hyundai Elantra makes you ask is the glass half empty or half full.

For the road test, we had the 2013 Hyundai Elantra Coupe SE. The car had not one option, thus the price was a very affordable $20,615. And to answer the question posed earlier, the glass is half full – well actually it is full.

The only downside of the car; it was nowhere near as fast as it looked. There was a 1.8-liter 148 horsepower four-cylinder engine under the hood that made 131 pound-feet of torque. It was mated to a six-speed manual transmission.

That was cool but not for zooming around town. You just couldn’t get the Elantra Coupe to aggressively accelerate from any speed or any gear. Downshifting was required to gather the torque needed to move the car with authority.

But that was the only drawback. The tradeoff for the small engine was gas mileage. It had an EPA rating of 28 mpg in the city and 38 mpg on the highway. No doubt that is appealing to the young buyers that the Elantra targets.

Still, it is all about style and the Elantra had what Hyundai calls fluidic sculpture design that tries to embody flowing fluid in the sheet metal of its cars. The car had a hexagonal front fascia opening and jeweled swept-back headlights.

Hyundai designers tried to convey a wedge-like sport coupe silhouette with deeply sculpted surfaces. A- and C-pillar angles framed a sharply tapered greenhouse, further accentuating the wedge profile. And just below the belt line, a prominent character line carried from the door through to the rear deck.

Hyundai press material said, “Wheel arch creases give a subtle flared appearance around front and rear wheels, for a wide and aggressive presence. A beveled rocker panel rounded out the lean and muscular effect.”

Although the Elantra Coupe was a small car it didn’t ride like one. It had a McPherson strut front suspension, with coil springs and gas shock absorbers. The rear setup featured a lightweight coupled torsion beam rear design for enhanced steering stability and monotube shock absorbers for ride comfort and control. A substantial 22.0-mm diameter front stabilizer bar helped reduce body roll and turn-in response when cornering.

All of this translated into a ride that was smooth and lacked the harsh bounce of most small cars. Steering was easy, the gear shifter felt good in the hand, and gear selection as well as downshifting was smooth. The engine was pretty quiet and there was not a lot of road or wind noise that made it into the passenger cabin.

And though this Hyundai Elantra didn’t have any optional equipment, it really didn’t need any. The test model featured a moonroof, satellite radio, and Bluetooth for smartphone connection. Other equipment included auxiliary and iPod jacks, a CD player with MP3 capability, heated front seats and a tire pressure monitor.

Most surprising was the spaciousness of the passenger cabin. Though you had to maneuver over or under the seat belts to get in the back seats, once there, headroom was reasonable for an almost six-footer despite the sloping roof. There was plenty of hip room and leg -room was adequate. This car could carry four people around town.

The front of the passenger cabin featured more of Hyundai’s fluidic design. Dominated by two very comfortable bucket seats, everything seemed to flow into the center stack, which had a clutter-free design. Audio controls were on top and spaced below them were the climate controls. It was nicely done. And there were redundant audio controls as well as cruise controls on the steering wheel.

In front of the driver, the instruments featured two large analogue dials for speedometer and odometer. In between, there was a small area with the fuel and temperate gauges. Designers always want the interior to meet the expectations generated by the exterior design. And it did in the 2013 Hyundai Elantra Coupe.