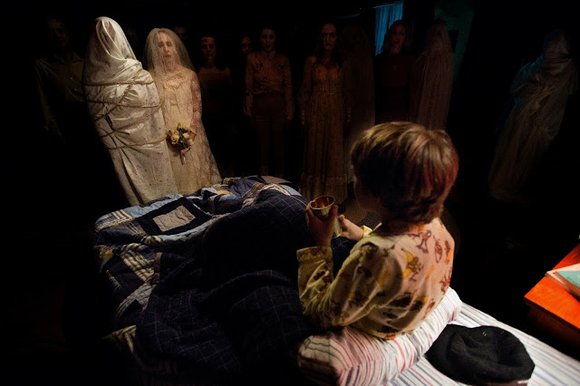 The Family (R for violence, profanity and brief sexuality) Mafia comedy about an American mobster-turned-snitch (Robert De Niro) living with his wife (Michelle Pfeiffer) and kids (Dianna Agron and John D’Leo) in a tiny town in France where he proceeds to blow his cover much to the consternation of the CIA Agent (Tommy Lee Jones) assigned to hide them in the Witness Protection Program. With Domenick Lombardozzi, Vincent Pastore and Dominic Chianese.

And While We Were Here (R for profanity, some sexuality and brief drug use) Romance drama revolving around a jaded writer (Kate Bosworth) stuck in a stale marriage who gets her groove back by embarking on a steamy affair with a young college student (Iddo Goldberg) while doing research on the island of Ischia for her grandmother’s (Claire Bloom) memoir. With Jamie Blackley.

Blue Caprice (R for profanity, drug use and disturbing violence) Beltway sniper saga chronicling the exploits of the infamous serial killers (Isaiah Washington and Tequan Richmond) who terrorized the entire Washington, DC area during the month of October in 2002. With Tim Blake Nelson, Joey Lauren Adams and Leo Fitzpatrick.

Four (R for sexuality, profanity and brief drug use) Day-in-the-life drama set on a very eventful Fourth of July on which a married man (Wendell Pierce) cheats on his bedridden wife (Yolonda Ross) with a closeted teen (Emory Cohen) he meets online at the same time that his daughter (Aja Naomi King) is entertaining the advances of a drug-addicted, ex-basketball star (E.J. Bonilla) she met at the mall. With Liam Benzi, Andrea Herbert and Kathryn Meisle.

GMO OMG (Unrated) Eco-documentary suggesting that humans are unwittingly serving as guinea pigs in agri-chemical companies’ long-term test of whether genetically-modified foods are safe for consumption. (In English and French with subtitles)


Herb & Dorothy 50X50 (Unrated) Bittersweet sequel follows recently-widowed Dorothy Vogel as she divvies up her and her late husband’s legendary art collection among museums located in all 50 states.


Informant (Unrated) Turncoat documentary about Brandon Darby, a left-wing activist recruited by the FBI in 2005 to spy on fellow progressives, who eventually renounced radical politics entirely to become a Tea Party advocate.

Jayne Mansfield’s Car (R for profanity, sexuality, nudity, drug use and bloody images) Class-conscious drama, set in 1969, about the tensions which arise when a clan of Alabama hillbillies’ relatively rich relations arrive from England for the funeral of the family matriarch. Starring Robert Duvall, Kevin Bacon, Billy Bob Thornton and Tippi Hedren.

The Last Time I Saw Macao (Unrated) Nostalgic documentary about a filmmaker (Joao Rui Guerra da Mata) who ventures from Portugal to his native Macao for the first time in 30 years after being summoned back by a cross-dressing former flame (Joao Pedro Rodrigues). With Lydie Barbara and Cindy Scrash. (In Portuguese with subtitles)


Mother of George (R for profanity, sexuality and a disturbing image) Marital crisis drama about a newlywed Nigerian couple (Danai Gurira and Isaach de Bankole) dealing with infertility while trying to keep their modest restaurant afloat in Brooklyn. With Yaya Alafia, Anthony Okungbowa and Angelique Kidjo.