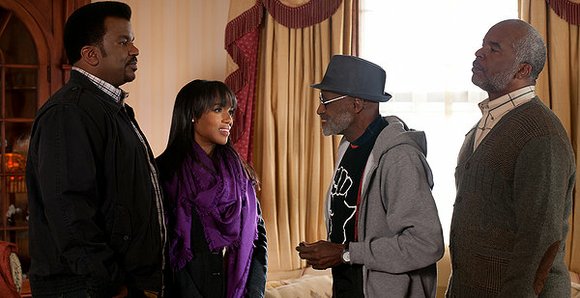 After dating for over a year, Wade Walker (Craig Robinson) is head-over-heels in love with his girlfriend, Grace (Kerry Washington). He’s ready to pop the question, and has even purchased a ring, but there’s a slight problem: he still hasn’t met her parents yet.

Because of her background, Grace is a little ashamed of her beau’s modest background. After all, she’s a high-powered Manhattan attorney with a proven pedigree, while he hails from the ‘hood and makes a living by performing at children’s birthday parties.

Concern about their class differences has Grace taking off alone to the tip of Long Island for a weekend getaway at her family’s waterfront mansion. Rather than sit at home licking his wounds, Wade decides to force the issue by crashing the gathering.

His unexplained arrival gets under the skin of Grace’s father, Judge Virgil Peeples (David Alan Grier), an overbearing patriarch with a need to control. Furthermore, Grace is afraid to tell him the truth about the nature of her relationship with Wade, which serves to establish the familiar, sitcom scenario revolving around a big lie that must be kept hidden at all costs.

Written and directed by Tyler Perry protégé Tina Gordon Chism, Peeples is a fish-out-of-water comedy whose stock-in-trade is making fun of the contrast between po’ and bourgie black folks. Ala popular Perry TV programs like House of Payne and Meet the Browns, the production is littered with colorful, two-dimensional characters bordering on caricatures.

There’s Wade’s embarrassingly-ghetto brother (Malcolm Barrett) who also shows up unannounced. He’s an oaf who puts his foot in his own mouth by suggesting that Grace’s lipstick lesbian sister (Kali Kawk) “looks too good to be gay.” Wade conveniently loses his wallet upon arriving which means he looks like a total loser when he can’t pay for anything.

You get the idea. Is it funny? I suppose, provided you’re in the target demo and haven’t seen Jumping the Broom, another comedy set at a beachfront estate (on Martha’s Vineyard in that case) and pitting crass blacks from the wrong side of the tracks against upper-class ones with their noses in the air. From shoplifting to lip-synching to skinny-dipping to a sweat lodge to skeletons-in-the-closet, Peeples throws everything at the screen but the kitchen sink, and just enough sticks.

An amusing, if not exactly original, African-American-oriented variation on Meet the Parents.

Rated PG-13 for profanity, sexuality and drug use

To see a trailer for Peeples, visit: http://www.youtube.com/watch?v=axnKLjkHlBg (Preview)