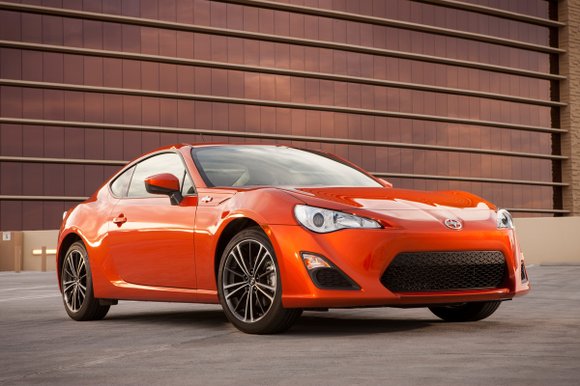 Back in the day, sports cars were small, handled with rifle shot accuracy and power was not necessarily based on the size of the engine, it was based on the weight of the car. That’s the equation that makes Scion’s FR-S so much fun.

The FR-S was propelled by a 2.0-liter boxer engine that made 200 horsepower and 151 pound-feet of torque. The flat four-cylinder was mated to a six-speed manual transmission. A six-speed automatic is available but the manual is a more fun to drive affair.

The powertrain got 22 mpg in the city and 30 mpg on the highway. That gave it an overall average 25 mpg. That number was quite respectable for a sports car.

Even though the engine produced 100 horsepower per liter, the real oomph came from the cars weight, or more precisely, its lack of weight. Coming in at 2,758 lbs., the Scion FR-S was light on its treads.

The rear wheel drive sports car had 2+2 seating but the rear two seats were just for show. It’s doubtful that anyone could get a serious car seat back there much less a person bigger than a toddler, a small one. However, the back seats did fold flat to create more cargo space.

The Scion FR-S had a low center of gravity. Ground clearance was a scant 4.9 inches and its drag coefficient was a slithery 0.27. The car was awfully maneuverable. With a steering ratio of 13.1 and lock-to-lock wheel turn of 2.48, it had a turning ratio of 17.7 feet.

It had electric power steering and in the FR-S that was a draw back. One of the fun parts of a sports car is feeling all characteristics of the road when driving. There was not that much connectedness between the road and the steering wheel. But it wasn’t that bad. You had to sense for it to notice.

Like any sports car, the FR-S’ ride was firm. Every crack in the pavement could be felt. The MacPherson strut front suspension and the wishbone rear setup provided a no nonsense oneness with the pavement.

Acceleration was quick. With downshifting, the car had more than enough grunt to get where it needed to be when it needed to be there. The interior was not cramped, nor did it feel closed in.

In addition to the weight saving electric power steering, there were no steering wheel controls. Neither was there a built-in navigation system or the space consuming screen that goes with it.

The audio system did have satellite radio and there was Bluetooth. The satellite radio was not active. It was a good thing the system had the capability of Bluetooth streaming music from the folder on a smartphone. There was also auxiliary and USB jacks.

Deep bucket seats dominated a cloth interior that was accented with red French stitching. The dash and other templates were polymer but they had the small checkerboard pattern of carbon fiber. The instruments were analogue and the instrument panel didn’t have a TFT.

The exterior had a low hood and low roofline. Bulging wheel arches gave the FR-S a muscular look and the dual exhaust had been tuned to give a robust engine note. The car was wide, low and it had angled headlights and LED enhanced taillights. In a phrase, the 2013 Scion FR-S had street presence.

And the best part of all was that it cost $24,930. At that price, the Scion FR-S was really special.