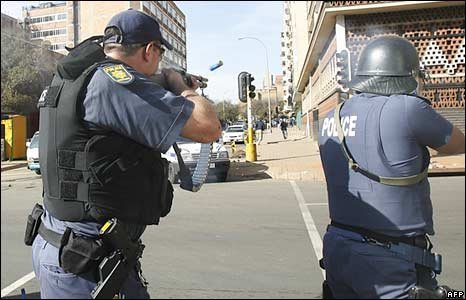 Here’s a recipe for disaster: Take a young man (or woman), raise him on a diet of violence, hype him up on the power of the gun in his holster and the superiority of his uniform, render him woefully ignorant of how to handle a situation without resorting to violence, train him well in military tactics but allow him to be illiterate about the Constitution, and never stress to him that he is to be a peacemaker and a peacekeeper, respectful of and subservient to the taxpayers, who are in fact his masters and employers.

Once you have fully indoctrinated this young man (or woman) on the idea that the police belong to a brotherhood of sorts, with its own honor code and rule of law, then place this person in situations where he will encounter individuals who knowingly or unknowingly challenge his authority, where he may, justifiably or not, feel threatened, and where he will have to decide between firing a weapon or, the more difficult option, adequately investigating a situation in order to better assess the danger and risk posed to himself and others, and then act on it by defusing the tension or de-escalating the violence.

I’m not talking about a situation so obviously fraught with risk that there is no other option but to shoot, although I am hard pressed to consider what that might be outside of the sensationalized Hollywood hostage crisis scenario. I’m talking about the run-of-the mill encounters between police and citizens that occur daily. In an age when police are increasingly militarized, weaponized and protected by the courts, these once-routine encounters are now inherently dangerous for any civilian unlucky enough to be in the wrong place at the wrong time.

I’m not the only one concerned, either. Indeed, I’ve been contacted by many older cops equally alarmed by the attitudes and behaviors of younger police today, the foot soldiers in the emerging police state. Yet as I point out in my new book, A Government of Wolves: The Emerging American Police State, this is what happens when you go from a representative democracy in which all members are subject to the rule of law to a hierarchical one in which there is one set of laws for the rulers and another, far more stringent set, for the ruled.

The first shooting incident took place in Charlotte, N.C., when three police officers responded to a 911 “breaking and entering” call in which a homeowner reported that a man she didn’t know or recognize had been knocking at her door repeatedly. Upon arriving on scene, the police saw a man matching the caller’s description running towards them. One officer fired a stun gun, after which the second officer opened fire on the unarmed 24-year-old, who died on the scene. Only afterwards did police realize the dead man, a former football player, had been in a car accident and was likely approaching them for help.