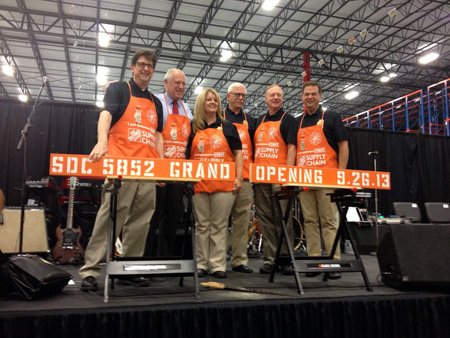 “We’re thrilled to welcome our associates to the newest stocking distribution center here at our Joliet campus, and we greatly appreciate the support we’ve received from the state and the local community,” Home Depot Supply Chain senior vice president Mark Holifield said. “This site, coupled with the Rapid Deployment Center next door, will play an incredibly important role within our supply chain, helping our stores provide the very best customer service possible.”

The facility, adjacent to the company’s Rapid Deployment Center, will employ approximately 200 people and serve more than 340 Home Depot stores across the Midwest, according to Holifield. However, the home improvement giant will not be adding new jobs at the Joliet location. Home Depot is closing facilities in both Bolingbrook and Romeoville, which combined included a total of about 1.5 million square feet of space, and moving employees from those two locations to the new CenterPoint facility, Holifield said.

“This allows us to be more efficient,” he said.

Holifield said it would likely take several weeks to move everything out of the Bolingbrook and Romeoville locations into the new Joliet facility. Construction of the new stocking distribution center began about 18 month ago. Holifield said Home Depot invested about $20 million just on the inside of the facility.

“I think it’s very special that this intermodal has attracted a major company like Home Depot,” Quinn said.

He said it can only help to solidify CenterPoint and the Joliet region as a major player in the intermodal industry, and will likely attract other big companies to follow suit and build similar facilities in the region.

The new stocking distribution center is part of Quinn’s agenda to create jobs and drive growth across the state.

“We are pleased that the Home Depot chose to build this new facility and employ approximately 200 people right here in Joliet,” Quinn said. “The region’s strong intermodal transportation resources and central location are ideal for this type of operation, and the area will only continue to grow as the new Illiana Expressway and South Suburban Airport are developed.”

While Quinn focused on the economic benefit of the new facility, he also said he was aware of the increased traffic it will cause on the already congested roadways, including Interstate 80 and Interstate 55.

That, he added, is why the Illiana Expressway is so desperately needed.

John Greuling, president and Chief Executive Officer for the Will County Center for Economic Development, said Home Depot is “leading the pact” in the distribution center sector and the opening of the new facility is “extremely significant.”

The new Home Depot Stocking Distribution Center coupled with a new cold storage facility opening soon in Wilmington, Greuling said, really drives home the need for the Illiana Expressway. Anyone doubting the need for the expressway, he added, should just come down to Will County and see what’s going on.