Welcome to the world of Prosecco Superiore! 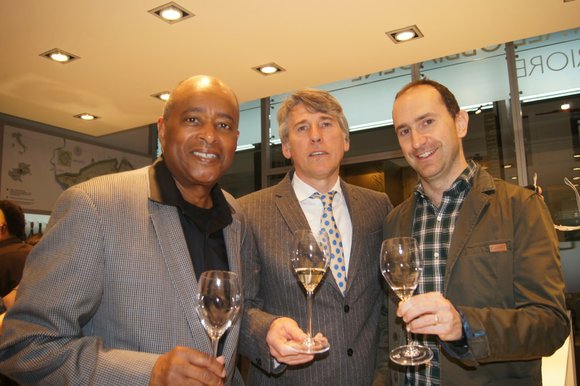 VERONA, Italy--Prosecco, specifically Prosecco Superiore from the Conegliano Valdobbiadene in the Veneto wine region of north-eastern Italy, not far from Venice, is one of the true treasures of the modern wine world. Like its kissing cousin, Champagne, it is a protected name, by law. Once used casually as the name of both the grape variety and the sparkling wine it produced, it is now defined by law under the designation DOCG, Denominazione di origine controllata or"Controlled designation of origin", the very highest level of quality assurance under Italian law. The change in legal status also brought another revision, the name of the Prosecco grape was recast to its original, ancient name, Glera. Now, with its elevated designation, and a firm footing both in tradition and in the latest technologies of modern winemaking, Prosecco Superiore is now set to take a prominent place at the center of the world wine consuming stage.

That fact was brought home with stunning clarity during a visit to the massive Conegliano Valdobbiadene pavilion, Carta Vini Vinitaly 2014 in Verona during Vinitaly 2014, the world's largest wine exhibition. The pavilion was a showcase for the more than 100 offerings by producers of 8 separate designations of Prosecco Superiore, including Brut Rive, Brut, Extra Dry Rive, Extra Dry, Dry Rive, Dry, Superiore Di Cartizze and the most captivating, Rifermentato in Bottiglia, sparkling wine which is re-fermented in the bottle, in much the same manner as Classic Champagne. The personalized tasting, which was guided by the Director of the Consorzio, Giancarlo Vettorello and oenologist Filippo Taglietti, was a revelation. 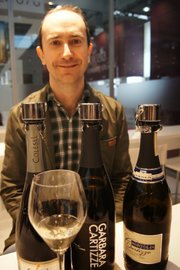 Having tasted many of the Prosecco Superiore DOCG Brut offerings previously during the recent US Vinitaly tour, I dove immediately into the more exotic offerings proffered; Extra Dry Rive, Superiore Di Cartizze and Rifermentato in Bottiglia selections. Among them, were the names of producers that had now become familiar to me, Villa Sandi, Bartolomiol, Mionetto and Zardetto. Equally demanding of my attention were lesser known , but stellar wines from Colesel, Spagnol-Col del Sas and Val d'Oca. Most of them will be on the shelves of discriminating wine shops over the late spring and summer months, so be on the lookout. Surprisingly, the prices of these liquid gems are quite reasonable. Most, including the Rifermentato, hover in the $15-$25 range. Try getting even a lesser known champagne for anywhere near that value!

Each style of Prosecco had its unique characteristic. The Extra Dry Rive's, for example, were very terroir driven, with fine bubbles and a very dry finish. La Farra di Soligo Millesimato 2013 ($20), for example, had a powerful nose of lilac blossoms and potpourri with the taste of very concentrated fruit on the palate. Distinctive flavors of tart lemons and crisp green apples lingered long in the mouth followed by a fresh finish, tinged with just a bite of star fruit.

Garbara Superiore di Cartizze Extra Dry ($35) is from the Grand Cru of the Valdobbiadene. Grapes are grown on the steep, chalky hillsides farmed by the Grotto family for more than 80 years. This is an elegant sparkling wine with a pale, straw color. Ultra-fine, pristine bubbles and the lush flavors of ripe citrus fruit nd the smell of very small white flowers are the dominant notes. The structure is very lean with an ample amount of acid to pucker the cheeks in preparation for the long, dry, satisfying finish. Only 7,000 bottles of this sparkling beauty were made. It can be found in the most discriminating wine shops. Sherry Lehmann in New York comes to mind. They'll be happy to ship you a case or two, no extra charge. You can do it online. Stock up for that special party to celebrate the new garden furniture!