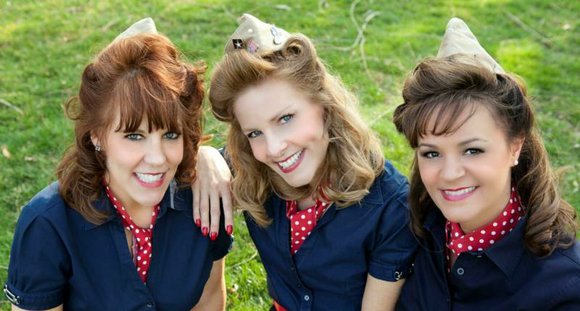 The Legacy Girls will perform as the Andrews Sisters at the Romeoville branch of the White Oaks Library to close out this year's Great Read program, which was devoted to the effects of the two world wars on the United States. www.legacygirls.com

The 2014 Great Read community literacy program’s Closing Gala will feature a “sentimental journey” down memory lane through 1940s-era music as part of its focus on the continuing impact of the two World Wars.

The Legacy Girls trio will perform a tribute to “America’s Wartime Sweethearts,” the Andrews Sisters at 6:30 p.m. Wednesday, May 7, 2014 at the Romeoville Branch of the White Oak Public Library, 201 W. Normantown Road, Romeoville.

This free community event will also include the announcement of the winners of the Great Read art contest, light refreshments, book giveaways and more.

The 2014 Great Read has included a wide-ranging list of fun, informative and educational events ranging from historical re-enactments to book discussions, special cooking demonstrations, lectures about the great historical figures of those times, and many more.

“This year’s Great Read has been, by far, one of the very best in terms of the related activities and community participation,” said Plainfield Public Library Event Coordinator Therese Chaves.

“This period is still so fascinating for many people because they have relatives who lived through it, or died in one of the World Wars, so they have their own connection to those times,” Chaves said.

That special “connection” to the WWII era is a major part of the Legacy Girls’ success.

Performing as Maxene, Patty and LaVerne Andrews, the Legacy Girls present “the toe tapping hits of the famous Andrews Sisters with tight three part harmonies, costumes, and synchronized choreography--not to mention comedic flair!” according to their web site.

The Andrews Sisters were immensely popular in the 1940s and beyond. They dominated radio; appeared in 17 major movies; recorded about 700 songs; earned nine gold records; sold over 90 million records; and performed for thousands of servicemen overseas with the 1945 USO tour.

Some of the Andrews Sisters’ hits have become American Pop standards, including “Boogie Woogie Bugle Boy,” “Rum and Coca Cola” and “I’ll be with you in Apple Blossom Time,” among many more.

“We are very excited to hear the Legacy Girls perform. They are the perfect way to end this year’s Great Read,” Chaves said.

The Great Read started in 2004 as Reading Across Plainfield to promote literacy, reading, conversation and community in the greater Plainfield Area.

In 2008, the program was re-named The Great Read to encourage broader community participation, better reflect the areas served by the participating organizations and emphasize the program’s literary focus.

The Great Read is also supported by generous grants from the Plainfield Foundation for Excellence, and additional funding from participating member organizations.