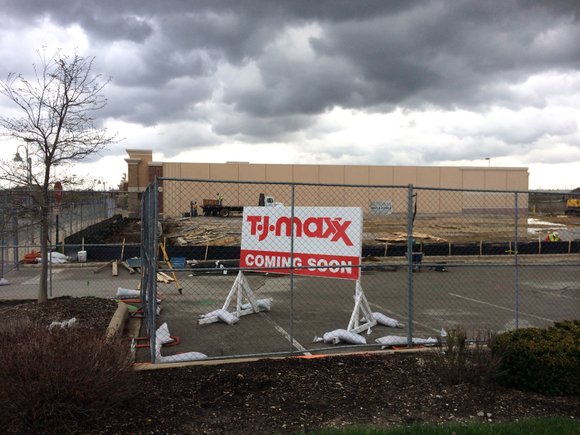 A new T.J. Maxx is under construction near the northeast corner of Airport and Weber roads in Romeoville and is expected to open in the fall. When it does, an existing T.J. Maxx store along Larkin Avenue in Crest Hill will be closing. Photo by Rex Robinson

The T.J. Maxx clothing retailer in Crest Hill will be closing once a new store now under construction opens in Romeoville later this year.

“They didn’t renew their lease with the owners of that strip center so apparently they are eventually leaving that location,” Crest Hill City Administrator John Tomasoski said Wednesday. “Our Community Development Director, Amber Miller, has been working with the owner of that center, Katz Management, to attract a new retailer to fill that vacancy when it occurs.”

Tomasoski was not happy to hear about T.J. Maxx leaving its current location at 1701 Larkin Ave. He said the goal of any community is always to keep the retailers you have while at the same time expanding and attracting new ones.

The foundation has already been set for the new T.J. Maxx store near the northeast corner of Airport and Weber roads in neighboring Romeoville. The new store will be more than 21,000 square feet and employ about 40 people, Romeoville village officials said.

“Initially they were held up a bit by the weather, but now they are moving along pretty quickly and they are expected to meet their proposed opening deadline of early this fall,” Community Development Director Steve Rockwell said.

Romeoville Mayor John Noak said the new T.J. Maxx will complement the Target and Kohl’s already there and will really help to round out that strip center.

Construction also is underway on a new Chipotle Mexican Grill, a Sleepy’s mattress store and a Dunkin’ Donuts at the north end of the strip center next to the Chili’s, the mayor said. Those three stores also could open later this year.

A new Goodwill store is planned next to the Aldi store on the northwest corner of Weber and Airport roads and a Shelby’s bistro is expected to open in that same strip center, Noak said. Also, a Lenny’s Car Wash will soon be going up in front of the Walmart near the southwest corner of that intersection.

Mary Edmondson, director of the Romeoville Area Chamber of Commerce, said all the new development in Romeoville is evident in the chamber’s membership. She said more than 60 new members joined the chamber in 2013 and the chamber is on track to have about the same or more this year.

Unlike other neighboring communities that are for the most part built out already, Romeoville is fortunate in that it still has many open areas left and there is still room to grow, Edmondson said.

A couple of other strip malls and retail developments also are underway at the other end of Romeoville, around the new Athletic and Events Center along Illinois Route 53.

“We’ll be doing construction on both corridors this year,” Noak said.