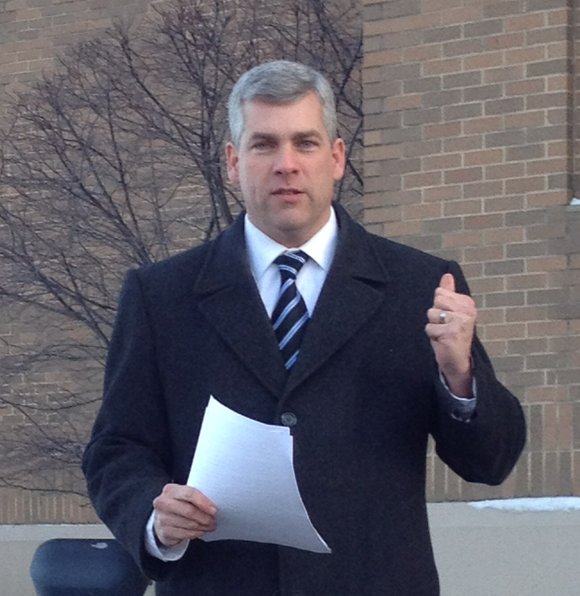 Joliet City Councilman and mayoral candidate Bob O'Dekirk said he backs a plan to build a truck bypass/toll bridge to the CenterPoint Intermodal Center off Interstate 80 at Houbolt Road.

The proposal, which Will County Executive Larry Walsh has also broached as a way to reduce traffic at Arsenal Road and Interstate 55, needs to be expedited in light of yet another I-55 truck accident Monday.

That crash was less than a month after two accidents on the same day at I-55 and Arsenal Road killed a total of five people. There have been more than 130 accidents in that area since construction started on junction improvements meant to ease traffic flow in to and out of the center.

Centerpoint -- the largest inland port in the country -- is so sprawling that it straddles parts of both Joliet and Elwood, and brings thousands of trucks to the site on a daily basis. The rigs are picking up goods dropped off by trains from the West Coast and delivering them either to nearby warehouse distribution centers or to destinations in the Midwest or beyond.

"The horrific traffic accidents on I-55 ... is a call to action” O’Dekirk said. “These types of accidents and numerous rollovers on both I-55 and I-80 won’t stop until we solve the truck congestion problem plaguing Joliet and the surrounding area.”

The new bridge/road to the Route 53 intermodal site should be funded with private money that would be recouped by charging a toll for the trucks to use the bridge.

O’Dekirk said he was contacted by several union officials last fall with a preliminary plan for a truck toll bridge that proposed private sources of money to pay for the project. Regular, noncommercial traffic would use it for free but trucks would be required to pay a fee.

Eventually, the city of Joliet would take ownership of the toll bridge and all revenues would go to city coffers, he said.

The bridge could also help the historic Route 66 corridor, O'Dekirk said, because truck traffic is starting to have an impact on tourists who follow the route but dislike the glut of semis clogging Route 53.

John Weiss, a historian and Route 66 Association of Illinois preservation committee member, warned recently that tourist dollars will be lost is travelers opt to avoid the area because of the traffic, O'Dekirk said.