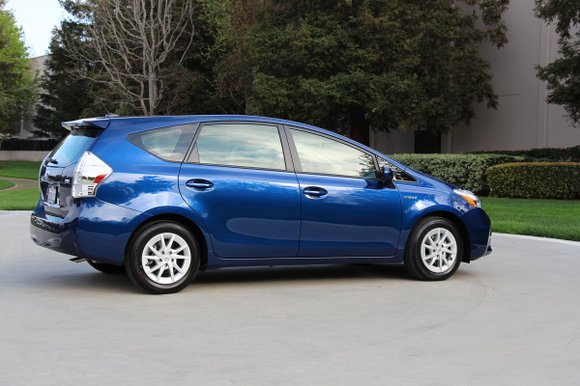 There are two ways to look at the Toyota Prius hybrid. Either the Japanese automaker dragged the rest of the U.S. market into gasoline-electric powered cars. If you want to compete with Toyota, you’ve got to have hybrids. Or, the automaker was out in front of the curve and saw that gas pump prices would eventually cause Americans to become a lot more sensitive to the fuel efficiency of their vehicles.

Whichever you believe, the fact is that Toyota is the industry leader in the sale of hybrids in the U.S. market and the automaker has expanded and continues to expand its leadership role.

We test drove the Prius v for a week. It was the third Prius, out of four, brought to market when it was introduced more than a year ago. The v stands for versatility. Yes, it is kind of hokey but this Prius was spacious, it could carry four people in real comfort and it could carry a bunch of stuff.

It had more than 34.3 cu. ft. of cargo space behind the split folding rear seat and a cavernous 67.3 cu. ft. of space with the rear seatbacks lowered. The front passenger seat folded flat creating even more storage space.

Although they were loathed to use the word, the Prius v had a silhouette that brought to mind ever so slightly images of a minivan. But it was smaller. Still, at a regional launch of the vehicle officials did say that this Prius was aimed at young families.

The second row seats were adjustable. They slid forward or to the rear and the seatbacks had a 45 degree recline for greater comfort. The cabin was chock full of nooks for storage. The Prius v had a dual glove box, bottle holders were in the front and rear door panels and there was a storage tray behind the center console.

Families, especially young ones, mean kids. And little ones want what they want when they want it; that means food, drinks, whatever it takes to keep them relatively calm. An available interior material is something that Toyota called SofTex.

We did not test it but the press packet for the Prius v Toyota said the material is easy to clean, resisted spills and was wear resistant. The ultimate testers, kids and time, will put that to the, uh, test.

Still, what makes a hybrid is the powertrain. And in the case of the Toyota Prius v, it is comprised of a 1.8-liter Atkinson cycle four cylinder engine and a 60 kW electric motor and a smaller electric motor as the power source for stuff like the radio, climate control system, etc.

Maximum voltage was 650 and the net horsepower output was 134. Obviously, this was not a car to go speeding down the pavement. Its continuously variable transmission (CVT) made that even less unlikely.

Still, the car was very good at what it did. In day-to-day traffic it was capable, on the expressways it was relatively able, it handled well, sight lines were great, the interior was airy, and we never got the feel of being cramped and never was the compact Prius v overwhelmed by other traffic.