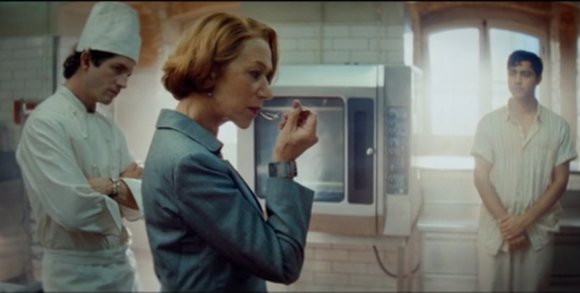 Helen Mirren stars in the new movie "The Hundred-Foot Journey."

The Hundred-Foot Journey (PG for mature themes, mild epithets, violence and brief sensuality) Three-time Oscar-nominee Lass Hallstrom directed this adaptation of Rochard Morais’ best-seller about an immigrant family which opens a Indian restaurant in a quaint village in the South of France, much to the chagrin of the steely proprietor (Helen Mirren) of a trendy bistro right down the street. Cast includes Om Puri, Manish Dayal and Charlotte Le Bon. (In English, French and Hindi with subtitles)

Into the Storm (PG-13 for profanity, sexual references, and scenes of intense peril and destruction) Found footage thriller about some storm chasers and thrill-seekers who get more than they bargained for when they decide to film a tornado bearing down on a tiny town in Middle America. Co-starring Matt Walsh, Arlen Escarpeta, Richard Armitage and Sarah Wayne Callies.

Step Up All In (PG-13 for profanity and sensuality) 5th installment in the street dance franchise revolves around an L.A. crew which ventures to Vegas to enter a competition where the winning team lands a lucrative pro contract. Ensemble includes Ryan Guzman, Briana Evigan, Adam G. Sevani and Stephen Boss.

Teenage Mutant Ninja Turtles (PG-13 for violence) Reboot of the adaptation of the comic book franchise finds the anthropomorphic protagonists (Alan Ritchson, Noel Fisher, Jeremy Howard and Pete Ploszek) rising from NYC’s sewers to fight their archenemy (William Fichtner) and his army of ninjas, with the help of an intrepid, young reporter (Megan Fox). Cast includes Whoopi Goldberg and Will Arnett, with voicework by Johnny Knoxville and Tony Shalhoub.

What If (PG-13 for profanity, sexuality and partial nudity) Romantic dramedy revolving around a med school dropout (Daniel Radcliffe) who develops feelings for his BFF (Zoe Kazan), despite the fact that she lives with her longtime boyfriend (Rafe Spall). With Megan Park, Adam Driver and Mackenzie Davis.

About Alex (R for profanity and drug use) Jason Ritter stars as the title character of this nostalgic drama about a group of college friends’ eventful reunion to care for a suicidal pal over the course of a three-day weekend. Cast includes Aubrey Plaza, Maggie Grace, Max Minghella and Nate Parker.

The Dog (Unrated) Gender-bending biopic about John Wojtowicz (1945-2006), whose robbery of a Brooklyn bank to pay for his boyfriend’s sex change served as the inspiration for the film Dog Day Afternoon.

Fifi Howls from Happiness (Unrated) Celebrity to obscurity documentary tracing the trajectory of the career of Bahman Mohassess, the flamboyantly gay artist known as the Persian Picasso, who went from national icon to persona non grata following the fall of the Shah of Iran in 1979. (In Persian with subtitles)

Keep on Keepin’ On (Unrated) Reverential biopic about 93 year-old jazz legend Clark Terry, trumpeter and flugelhorn pioneer who played with everyone from Duke Ellington to Count Basie to Dizzy Gillespie to Quincy Jones.

Web Junkie (Unrated) Internet addiction is the subject of this expose’ examining a trio of adolescents undergoing treatment for the compulsive disorder at a rehabilitation center in Beijing, China. (In English and Mandarin with subtitles)