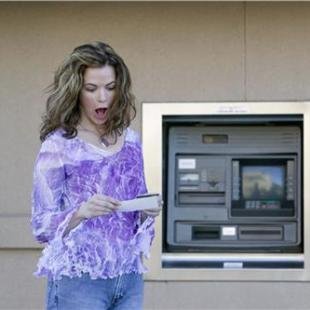 Consumers who maintain low and no cushions in their checking accounts may have thought that the overdraft 'banking service' was a big help against bouncing checks. But as the use of debit cards have replaced most cash purchases, this 'service' has become a drain of available cash for consumers and a major source of revenue for banks.

A new research report by the Consumer Financial Protection Bureau finds small debit purchases lead to expensive overdraft charges also found that the majority of debit card overdraft fees are incurred on transactions of $24 or less. Further, as the majority of overdrafts are repaid within three days when the bank repays itself from the consumer's next deposit, the median overdraft fee of $34 carries the equivalent of 17,000 percent annual percentage rate (APR).

Earlier research by the Center for Responsible Lending (CRL) similarly found that consumers using debit cards paid $1.75 for every $1 overdrawn.

"With the advent of debit cards, consumers started using them rather than cash for more and more small or impulse purchases. And, as banks and credit unions covered more and more of the transactions, they have assessed higher fees for doing so", said CFPB Director Richard Cordray. "Today, more than half of consumer checking account income is from overdraft fees."

An overdraft occurs when a consumer does not have enough money in his or her checking account to cover a transaction, but the bank or credit union pays the transaction anyway in exchange for a fee. Consumers can be charged overdraft fees on checks, debit cards, ATM transactions, automatic bill payments or direct debits from lenders or other billers.

CFPB's new study both reinforces and heightens ongoing concerns that overdraft fees on debit card transactions in particular are harmful to consumers. CFPB also found that a 2010 rule from the Federal Reserve did not solve the overdraft problem. That rule required financial institutions to get consumers' 'opt-in' to overdraft fees on debit cards; but it failed to address how large and frequent these fees can be. Additionally, many banks used heavy-handed and deceptive marketing tactics to lure consumers to 'opt-in'.

CFPB found that consumers subjected to overdraft fees on debit cards, pay an average of nearly $260 per year in overdraft and nonsufficient funds (NSF) fees. Nearly one of five consumers overdrew their checking accounts more than 10 times a year. Every dollar charged for overdraft translates into fewer available dollars once a deposit is made into the account. Even worse, many consumers are unaware of the deficiency in their funds or how often these fees were charged until after the fact. As a result, many consumers can be blindsided by a barrage of fees resulting in a devastating financial impact. The hardest-hit of consumers in these scenarios are those with low-to-moderate income.

Some banks - such as Citibank, Bank of America, HBSC and a significant number of community banks -- have chosen not to charge overdraft fees on debit card purchases at all. Even so, most banks continue to use overdraft fees as a lucrative revenue stream.

In recent years, civil rights leaders have spoken loudly and clearly against overdraft practices, nothing that harmful overdraft increases the ranks of the unbanked. Two major banks, JP MorganChasehttp://www.civilrights.org/fairhousing/banking/ltr-to-chase-re-overdrafts-11-29-10.pdf and Wells Fargo

"Thankfully some banks have begun stepping away from these abusive practices. . . The CFPB should use its authority to ban or limit overdraft fees on debit card and ATM transactions and rein in excessive bank fees on all checking account transactions," concluded Calhoun.